Sophomore forward wants to leave her impact on field, eager to affirm she was rightfully recruited to Wazzu 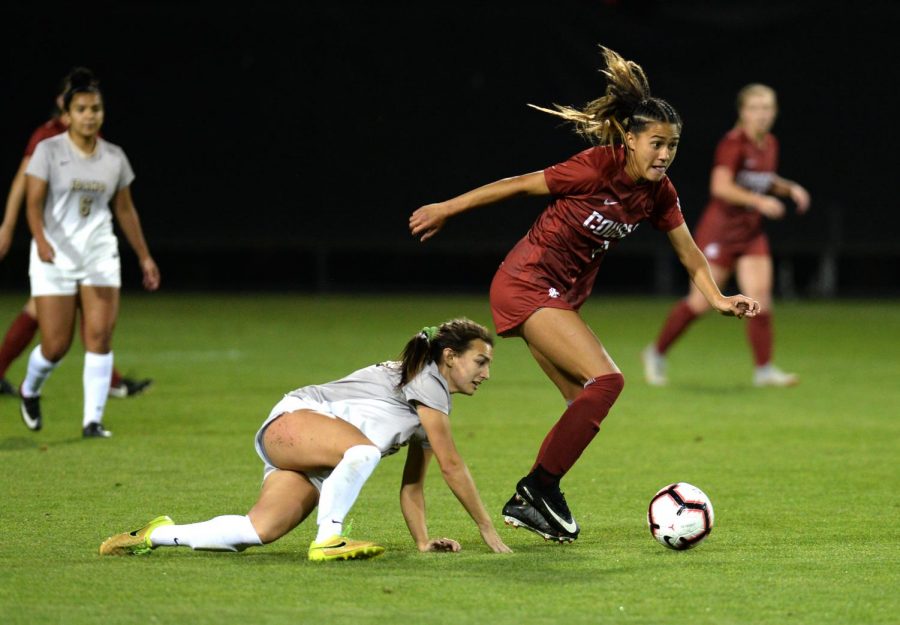 Finessing her way past another Idaho player, sophomore forward Makamae Gomera-Stevens leaves multiple players in the dust during the match against the Idaho Vandals on Sept. 6 at the Lower Soccer Field.

Almost 3,000 miles separate Kapolei, Hawaii, and Pullman, Washington. Despite the distance between her hometown and where she goes to college, Makamae Gomera-Stevens feels right at home as a Coug.

“I love the atmosphere here, and how everyone in Pullman is a die-hard Coug fan,” Gomera-Stevens said. “When I was getting recruited, I realized I wanted to play a sport here because we would have a ton of fans at our games and we would have a lot of support from everyone that goes to this college. The coaches made me feel like they wanted me to be part of this school.”

The sophomore business major did not take the conventional path to becoming a Division I soccer star.

“I started as a cheerleader, but my dad did not want me to be a cheerleader for a long time, so my parents signed me up for a random city team when I was young,” she said. “I guess I was pretty good at it, so I continued playing,”

From then on, she played for the Surf Hawaii Academy and Leahi club team where she won the prestigious 2016 Surf Cup championship, a tournament between the top teams in each state. Gomera-Stevens said this was her biggest accomplishment in her soccer career to date.

Last year during her freshman season, Gomera-Stevens scored a goal and two assists, but she admitted she had higher expectations and wants to prove what kind of player she really is this year.

“I feel like I have a lot to prove,” Gomera-Stevens said. “I came in this past summer feeling hungry to better myself. I go into each practice making sure me and my teammates are improving and making sure the team needs go before my needs.”

Currently, Gomera-Stevens is a forward for the No. 9 Cougar soccer team, which is ranked the highest it has ever been in program history. The squad is also off to its best start in team history as it is undefeated through eight games so far.

Gomera-Stevens has been a big part of the team’s success this season. She is second on the team in goals scored with three and she has one assist. Despite the work from Gomera-Stevens and her teammates, she knows the Cougs have a tough task ahead of them during Pac-12 conference play.

“We just need to take it one game at a time and focus on winning each game,” Gomera-Stevens said. “Every matchup is going to be a challenge because most of the teams in the Pac-12 are doing really well this year, so every game will be a battle.”

Though she may only be a sophomore, Gomera-Stevens has good insight into what she wants to accomplish during her time at WSU.

“I want to have known that I made an impact on the field, and I want the coaches to know they were right in recruiting me and I want to get my name out there, saying that I was part of something successful for a great program,” she said.

Whether it’s on or off the field, Gomera-Stevens is eager to show her talent and help carry her team to victory.