Junior is making strides on offense, establishing herself as a key playmaker for undefeated No. 9 Cougars 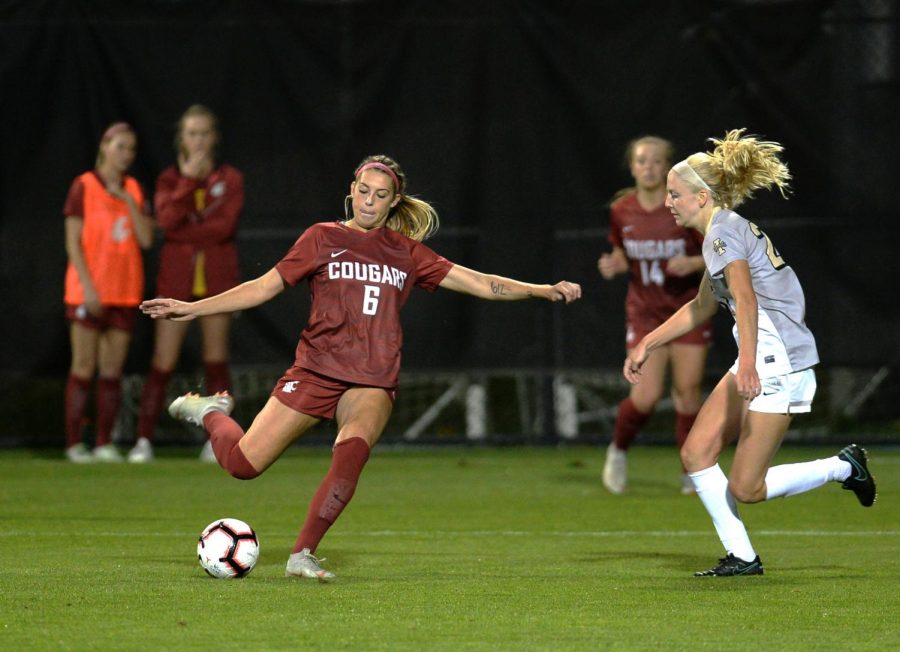 Junior forward Morgan Weaver scores her second goal of the game, making her way past multiple Idaho Vandal players in the match on Sept. 6 at the Lower Soccer Field. Weaver has scored six goals in eight games this season.

Since she was a kid Morgan Weaver has always been on the soccer field — it started when her dad would carry her around in a backpack while he coached. Weaver has played nearly all her life and is now an important part of the No. 9 WSU soccer team.

At 4 years old, Weaver started playing with her dad as the coach and she gradually developed skills and passion for the game. Weaver attended Curtis High School in University Place, Washington, where she was a four-year letter winner.

In high school, Weaver ended her career scoring 97 goals and led her team to a 56-15-6 combined record. As a captain her senior year, she scored 37 goals and ended the season 17-3, placing the team in the state quarterfinals.

In 2016, her first year at WSU, Weaver was one of five players to start in all 19 games of the season while she also led the team with a total of eight goals. Even though the team did not have its most-successful year, with a 8-9-2 record, Weaver still thought the start to her college career was exciting.

“My first college experience I got was playing on the soccer field down there against Brigham Young University,” Weaver said. “It was super exciting and there were so many people there. I had so much adrenaline and I was so excited.”

Last year as a sophomore Weaver helped guide her team to the NCAA Tournament where the Cougs made it to the third round of the tournament for the first time in program history. With seven goals and two assists on the season, Weaver’s aggressive play as a forward brought her nothing but success.

This season, the junior has already scored six goals while adding two assists just one game into Pac-12 conference play. These six goals add to a total 21 career goals, tying her for sixth place in program history.

In the past two games Weaver scored the game-winning shot, totaling nine career game-winners and putting her third in school history. When asked about her success at WSU, Weaver tends to not focus on herself but rather on helping her team.

“Honestly, I mean I think it is awesome, but that’s not really what I am looking for or anything,” Weaver said. “I’m just looking to help my team win as many games as we possibly can.”

The opening game of the team’s Pac-12 conference play was against then-No. 8 University of California, Los Angeles. In this game, after a long pass from sophomore defender Aaqila McLyn, Weaver delivered a game-winning goal in the 60th minute after driving past two defenders and firing a shot inside the far post.

Upsetting UCLA was a major goal Weaver and the team wanted to accomplish this season. The end result in the victory over UCLA led to the Cougars being ranked No. 9, the first time in school history the team has been ranked inside the top 10.

Head Coach Todd Shulenberger said Weaver is a strong attacking forward and stressed how the goal versus UCLA will help the team in future games.

“These are one-goal games,” Shulenberger said. “If we have Aaqila make a pass with one of our top forwards to make a run like that and then ask Morgan to deliver, Morgan’s going to deliver.”

With the rest of the Pac-12 competition coming at her, Weaver is excited and determined to finish what she has helped the team accomplish in the past year. The success brought last year has left Weaver and her teammates hungry for victory.

Weaver has big ambitions for the rest of her junior year. However, she and her teammates know the only way to continue the fight is to focus on what is ahead of them.

“Our main goal is just taking it day-by-day and taking it game-by-game,” Weaver said. “We don’t think about a game after 24 hours, so even if it is a huge win just like Friday night against UCLA, we give ourselves 24 hours and then we forget about it and move onto the next team.”