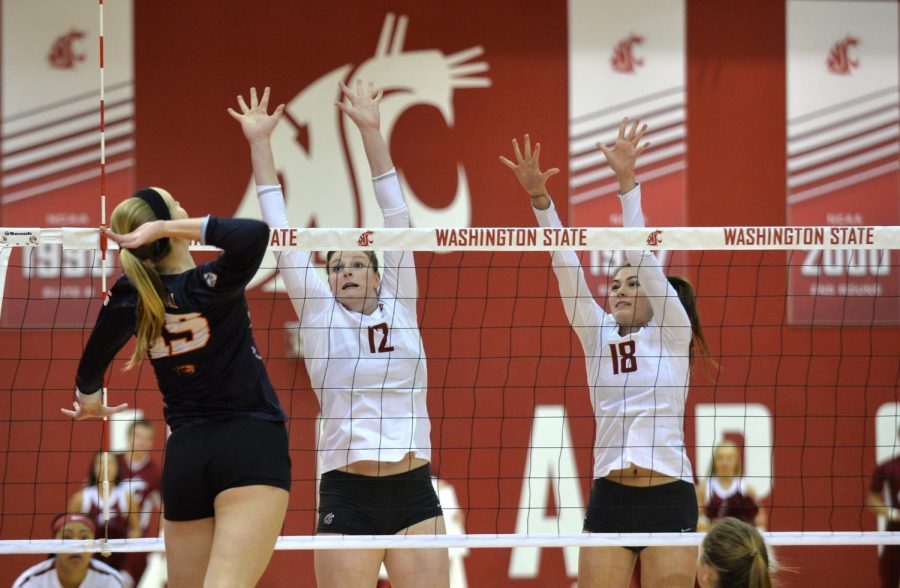 Mary-Kate Marshall, right, senior outside hitter from Oregon State, goes up for the kill against junior opposite Claire Martin, middle, during a match against the Beavers on Oct. 15, 2017 in Bohler Gym.

WSU volleyball (9-3) had a great start to its season, beginning the year undefeated with nine straight wins. Senior middle blocker Claire Martin had a big part in this hot start for the team as she became the all-time leader for block assists in program history this season.

Martin didn’t start playing the sport until her freshman year in high school. She said she had to choose between soccer and volleyball to do as a fall sport.

“I knew I wasn’t going to do soccer, so I said why not volleyball,” Martin said.

Her dream for her whole life was to play basketball for Stanford University, she said. However, passion took her elsewhere.

“I fell in love with volleyball and it took over,” Martin said.

On her visit, she said she fell in love with the WSU campus right when she arrived. The more she got to know people, the more she loved the family feel of the campus and everyone on it.

“They go to the games, but they are wearing UW stuff,” Martin said. “I want them to cheer for me and the Cougs.”

Coming into her senior year, Martin said her personal goal was to set the school career record for all-time block assists — which she has already accomplished. As for her teammates, she said they want to make it to the NCAA tournament again.

Martin said she has been a middle blocker since she started playing in high school, but she changed to the right side last year. She is still on the right side this year but said she can play both.

“The transition was hard at first, just trying to get used to the differences,” Martin said.

Changes on the volleyball court can be difficult to manage, but Martin also faces challenges in the classroom as well. Martin is majoring in mechanical engineering, which she said is an intense major that requires a lot of out-of-class work.

She said she has to work on time management and organization to keep everything straight between school and volleyball.

“We have study tables on the road which helps,” Martin said. “My free time always gets turned into study time.”

Martin is unsure where she wants to work when she graduates, but she said she is looking into Boeing and Microsoft.

Her senior year is special to her and she is proud of where the team is at this point in the season. She said the team chemistry is the best she has had in all four of her years here and that is key.

“These girls have my back and I have theirs and that is so big,” Martin said. “The trust concept is huge.”