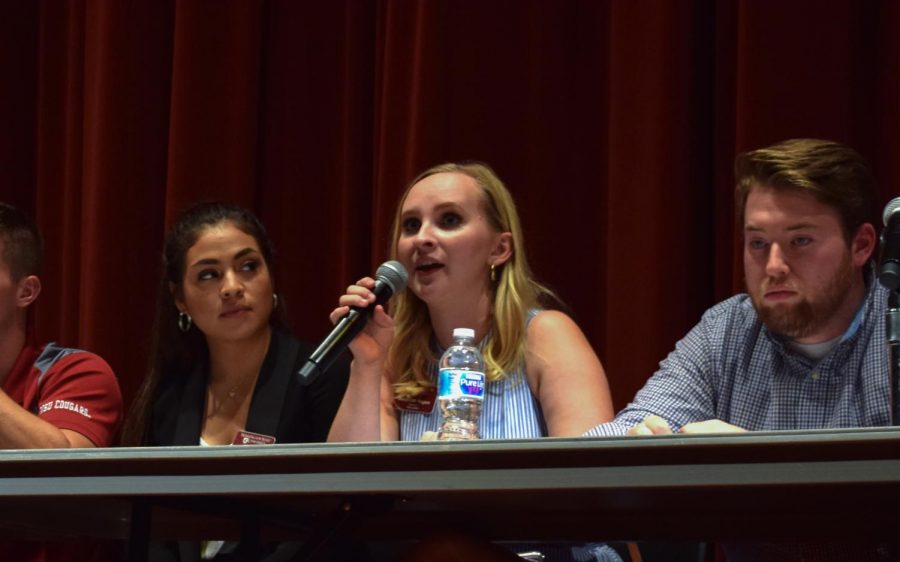 The ASWSU Executive Branch held a question-and-answer event and touched on topics such as the local community and veterans Thursday in the CUB.

Students had the opportunity to ask the panel questions in person or through social media. Questions were geared towards what projects ASWSU has been working on and how President Savannah Rogers and Vice President Tyler Parchem have executed their 100-day plan.

Rogers gave some background information to the audience about several projects she is currently working on.

One of those projects is safety on campus involving active shooters. She said she is working with WSU to see what the current policy is and how the university will communicate with students if a situation like that happened.

She also touched on the Cougar Health Fund, which is student-led and student-run. All  the money goes toward mental health resources and sexual violence prevention at WSU.

Rogers wants to continue to be the voice of students to different high-level administrators.

“If there ever is something that you don’t like on campus, or want to change on campus … you can always reach out to myself or [Parchem],” Rogers said.

The panel was also asked about 2 Weeks of Pullman.

Keegan Otter, director of community affairs, said the project is made for students to explore the town.

“This is the first event of its kind, it’s the beta year, so it is the first year we are testing it out,” Otter said. “We want students to go check out what Pullman has to offer.”

During the event, local businesses are donating up to 7 percent of the profits made to the Cougar Health Fund.

Although the project ends Friday, Otter let the audience know there will be another community project on the way. He said the new project, titled “What is There to do in Pullman?” will be a creation of a list of activities to show people what Pullman and the Palouse region has to offer.

Veterans on campus and the ways ASWSU will be working with them was also a concern.

Jerry Martinez, director of diversity and inclusion, said they want to reach out to the Student Veterans Committee and get insight on what their needs are.

Mariela Frias-Gomez, another director of diversity and inclusion, said there has been work on an action plan that supports underrepresented students, including veteran students.

Emma Epperly, deputy director of communication, said the action plan will be released to the public early next week.