No. 22 WSU volleyball defeated No. 25 Utah in a five-set match 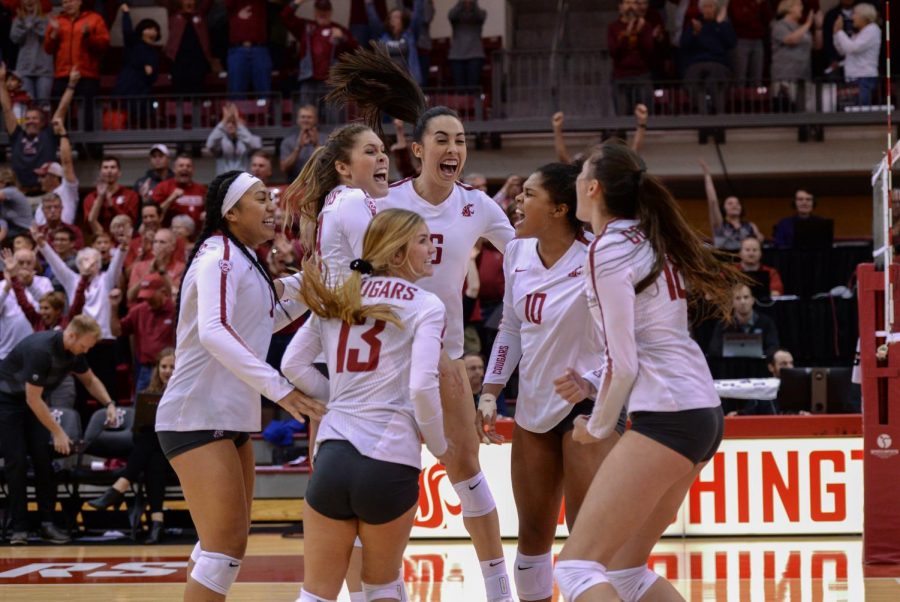 The WSU women's volleyball team celebrates on-court after scoring the 18th and winning point against Utah on Friday night in Bohler Gym.

No. 22 WSU volleyball took down No. 25 Utah in the Homecoming game on Friday night in Bohler Gym. The intense match lasted five sets and ended in a 3-2 victory for the Cougars.

After two losses last week, the Cougars were looking to get back on track facing Utah. The five-set match was a series of intense battling back and forth between the two teams.

In the first set, the Cougars were in the lead nearly the entire time resulting in a 25-9 win over the Utes. WSU tallied 16 kills in the set along with a powerful ace by senior outside hitter Taylor Mims, while Utah only managed six kills.

The second set of the match was a hard-fought battle but WSU managed to grab their second win of the night with a score of 25-22. The Cougars led the Utes since the first two points of the set, however, in this set, WSU laid down only 12 kills with only three errors compared to Utah’s 16 kills and seven errors.

The third set didn’t go the Cougs way as they were slow to get fired up as Utah started with a 4-0 run. The Cougars tallied only seven kills with eight errors leading Utah to hold the lead for the remainder of the set, securing their first win of the match by a score of 25-17.

Utah grabbed their second win of the match in the fourth set of the night by a score of 25-17, advancing the battle to five sets.  WSU fell behind the entire match again, hurting themselves with six errors and 13 kills versus the Utes two errors and 18 kills.

Head Coach Jen Greeny was satisfied with her team’s effort and the win.

“We’ll take a win anyway we can get it, even in five sets,” Greeny said, “you know we’ve had a couple tough five set losses, so it’s really nice to get the five set win her at home.”

The Cougars will fight to grab another victory when they face No. 23 Colorado at noon Sunday in Bohler Gym.