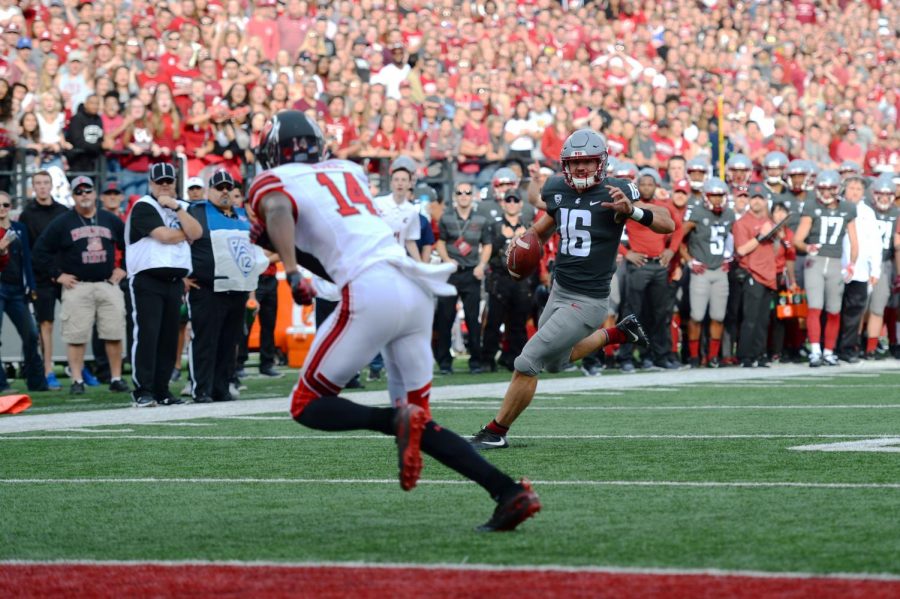 Graduate transfer quarterback Gardner Minshew II scores WSUs second touchdown of the game against Utah off of a 10 yard run in the second quarter, bringing the score to 14-14 Saturday at Martin Stadium.

WSU nearly let the University of Utah slip past its grasp but in a second half defensive standoff, one big play would separate the Cougars in a 28-24 victory over the Utes at Martin Stadium Saturday evening.

It seemed that none of the headlines coming into this evening’s contest truly came to fruition. But perhaps WSU Head Coach Mike Leach sums it up best.

“I think we’re still fighting consistency,” Leach said. “They’re a really good defense, one of the top defenses in our conference and in the country, they’re going to get you occasionally. I thought we had a good first half on offense and then defense I thought we struggled at times, we’d get right there and then we’d struggle at times. I thought we played better in the second half on defense especially the fourth quarter.”

The initial headline coming into the evening was Utah’s nation-leading defense coming to Pullman to take on the nation’s second-best passing attack in Leach’s Air Raid offense. But by the end of the night it was Utes’ offense needing to prove their worth against the Cougars defense and WSU prevailed.

The first half it was all offense; back and forth both teams went in the first half, putting any low-scoring predictions to rest early.

Both teams filled the first half stat sheet with over 200 yards of offense; Utah (2-2. 0-2) having their way on the ground while WSU (4-1, 1-1) stuck to the air and was 7 yards shy of 300 total first-half yards. Those numbers would plateau dramatically in the third quarter before a dramatic fourth quarter finish.

Tyler Huntley, the junior quarterback who Leach claimed to be “the key to [Utah’s] offense,” couldn’t be corralled. He led the way for the Utes in the first half with two scores along with 90 rushing yards while junior running back Zack Moss complemented the quarterback with a score of his own and 69 yards on the ground.

Two he finished with touchdown passes, one to sophomore receiver Tay Martin and then a long one to junior receiver Dezmon Patmon. While his last of the half he used his legs to get in the endzone.

When the halftime whistle blew it appeared that WSU had no answer to the Utes’ ground attack and Utah had no answer to the Cougars passing attack. When both teams came back to resume action, their offensive production went to a standstill and the low-scoring defensive battle everyone had anticipated began.

The only drive that went anywhere in the second half for Utah was their first which they turned into three points off of a 41-yard field goal from senior kicker Matt Gay.

Then both teams traded eight drives that came up with no points at all. WSU came close to equalizing the score midway through the third quarter but a 52-yard field goal attempt was blocked by the Utes’ defense.

All that was needed was a big play from either side and the game would surely be decided. Redshirt junior wide receiver Easop Winston Jr. was the man to deliver the big play to put the Cougars on top – a lead they would not surrender.

“I saw one-on-one with a guy that’s pretty much unguardable one-on-one,” Minshew said about his pass to Winston which was a game-winning 89-yard touchdown. “So I just gave him a chance and [Winston] made it work.”

Winston concurred with what Minshew saw.

When it was all said and done, Minshew finished his night with 445 passing yards and four total touchdowns to one interception. It was the fifth consecutive game Minshew threw for over 400 yards.

“Honestly I don’t care if I throw for a 100 yards if we win,” Minshew said. “I just want to win games… Utah is a great team, super well coached they are every bit of that best defense.”

With four minutes left to respond, the Cougars doubled down on their defensive efforts and limited Utah to 16 total yards despite the drive lasting nine plays. A false start penalty followed by a holding penalty would turn a fourth-and-five conversion to a fourth-and-20 conversion that would prove to be too much for Huntley and his offense to manage.

“We had it, we shot ourselves in the foot,” Huntley said. “We had a plan of coming out and running the ball, we knew we had to keep it on the ground. Washington State did a good job with adjustments.”

WSU will take on Oregon State University 6 p.m. next Saturday in Corvallis.