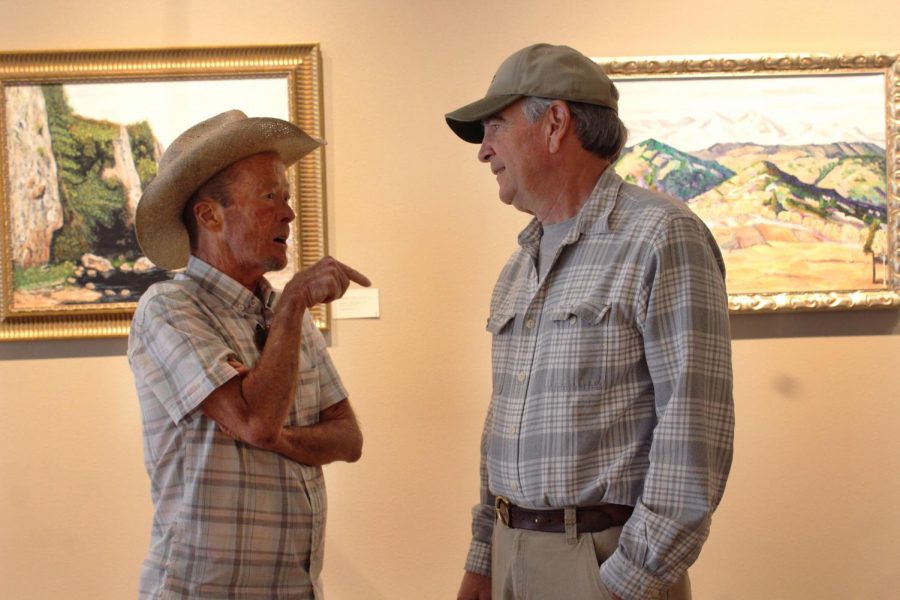 Colfax saw the return of one of its hometown artists Robin Stanard from 1-3 p.m. Saturday with a reception at the Whitman County Library. Stanard had enough space to set up each of his colorful oil paintings around the two large, open rooms.

“It’s a pretty nice facility,” Stanard said. “I didn’t know I’d do all this. I always knew I was a good artist though, even from a young age.”

Stanard taught himself his own painting techniques to replicate the works of famous artists such as van Gogh, Claude Monet and Pablo Picasso. While he has been artistic his entire life, Stanard said he only recently started to oil paint.

“I had acrylic paints but my girlfriend’s dog ate them all,” Stanard said. “So I gave up on that. Anyways, these paints you see here are only about two and a half years’ worth of work. I only started oil painting in the November of [2015].”

Many of Stanard’s friends and passerby made their way into the gallery to view his work. Each painting was displayed in gilded picture frames and some even mistook the oil paintings as still being wet.

Stanard described oil painting as not as intuitive since the paint may take weeks to dry between each phase. Despite the added challenges, he feels painting in oils are more rewarding than acrylics.

“It’s the best,” Stanard said. “I keep my brushes in a big Tupperware container and I bet there are 600 paint brushes in there. Each of them [have] their own different personality.”

Stanard said the paintings were primarily inspired by the great artists in the past, but he was motivated to keep painting after his younger brother passed away a couple of years ago. He described painting as a therapy.

Family friends and married couple Ron and Kathy Skeels drove over an hour from Spokane to view Stanard’s work. Ron offered more insight on Stanard’s struggles over the time of his oil painting career.

“What most people don’t know is that he has health issues,” Ron said. “Despite that, he’s been able to accomplish all of this. It’s great for him to demonstrate his love for art in this fashion and this late in life, but don’t tell him I said that.”

Ron said he was a non-artist and enjoyed the comments in the guest book as much as the art on the walls, especially if they had a better eye than he did. More than coming for the art, Ron and Kathy came for the artist.

“He has a real passion,” Kathy said. “He has rekindled something he can express.”

Kathy had seen Stanard’s studio at his home but said seeing his art in a large, open gallery felt like it was on a grander scale. In a few years, she was surprised by how much Stanard was able to produce.

“I think it’s very impressive for a small town to have this for artists,” Kathy said. “Whether it’s painting or other art, it’s great to have remedies to have this.”

Not all in attendance understood Stanard’s intention with the display. Bruce Stephenson had drove from Alaska to see his friends in Spokane. He said he stopped at the library without even realizing there was an art gallery.

“I didn’t know what was going on,” Stephenson said. “I walked in and I thought, ‘well this isn’t very good.’ Then I looked at the name on the wall and I realized they’re van Gogh’s. It tells you something about how much I know about art.”

Stephenson clarified that the copies that Stanard created weren’t bad, but suggested that Stephenson’s understanding and appreciation of art wasn’t there with the “art masters.”

Stanard moved around the room, speaking to each of his friends and family and showing his appreciation for each person who came.

“I’ve been doing artwork for my whole life,” Stanard said. “There is a certain amount of discipline that goes into this. It takes about a month to paint one of these so that’s why I don’t give ‘em away.”