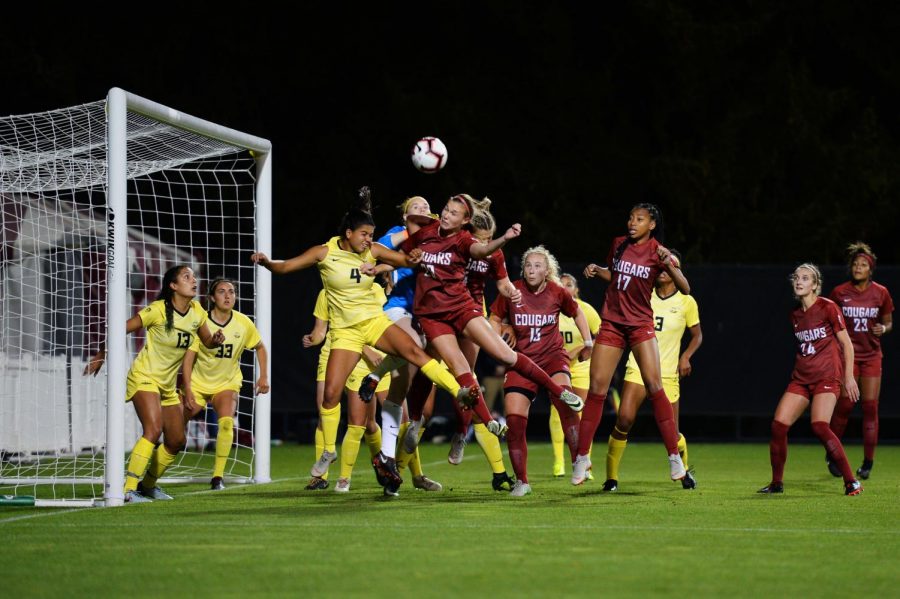 Redshirt junior forward Alysha Overland attempts to score a header off of a corner kick during the game against the university of Oregon on Thursday at the lower soccer fields.

No. 7 WSU soccer had to be nothing short of great to remain undefeated. It will need to maintain that Thursday on the road against No. 20 University of Colorado to keep the perfect start alive.

“We had two great wins this past weekend against the Oregon schools,” Head Coach Todd Shulenberger said. “We are looking forward to this big weekend against Colorado and [University of] Utah, which I had on the schedule day one as a huge weekend for the Cougs.”

The Cougs are coming off a 2-0 homecoming weekend which consisted of a 2-1 comeback victory against University of Oregon and a shutout win over Oregon State University in which the Cougs took a resounding 34 shots.

Despite the offensive outpour against the Beavers, Shulenberger was not so happy with his team’s performance.

“Honestly, I didn’t like it because 34 shots did not amount to a lot,” Shulenberger said. “We were unrealistic in our shooting and a little bit selfish at times before making some adjustments at halftime.”

The Cougars are coming into a highly-anticipated Pac-12 matchup with the Buffaloes while they hang on to their 10-0 start and the title of the only Division I school with an undefeated record.

The Buffaloes (9-0-3) return home to Boulder for their first conference home game. They are currently 1-0-2 in Pac-12 play after 1-1 ties against University of Arizona and Arizona State University and a 6-0 beat down win over Oregon State.

WSU will be tasked with defending the quick-paced Buffs, who are ranked second in the nation in goal scoring. They are led by junior forward Tatum Barton and redshirt senior forward Jorian Baucom, the top two goal scorers in the Pac-12 this season. They are also joined by junior midfielder Taylor Kornieck who is dynamic on both sides of the ball.

The person standing in the way of the explosive second-ranked scoring offense of the Buffaloes will be WSU redshirt junior goalkeeper Rachel Thompson. Thompson is filling in for injured senior goalkeeper Ella Dederick and has held her own so far in front of the net, boasting clean sheets against University of Idaho, University of California, Los Angeles, and Oregon State.

“All the goalies are doing a good job right now. Rachel has the accolades right now,” Shulenberger said. “She’s winning games right now and she has stepped in at the right time and taken the bull by its horns by making the key moments in key games.”

WSU has lost its last two matches against Colorado, but Shulenberger said he knows if they execute its game plan, the Cougars look primed to turn their luck against the Buffaloes.

“We got to keep them off the score sheet,” Shulenberger said. “We know what they are good at and they know what we are good at. It’ll be two teams doing what they do best and the other team trying to slow them down. We have a great plan on what we need to do and we are looking forward to the challenge on Thursday.”

The match against Colorado kicks off at 2:30 p.m. Thursday at Prentup Field in Boulder, Colorado. The game can be seen on Pac-12 livestream.