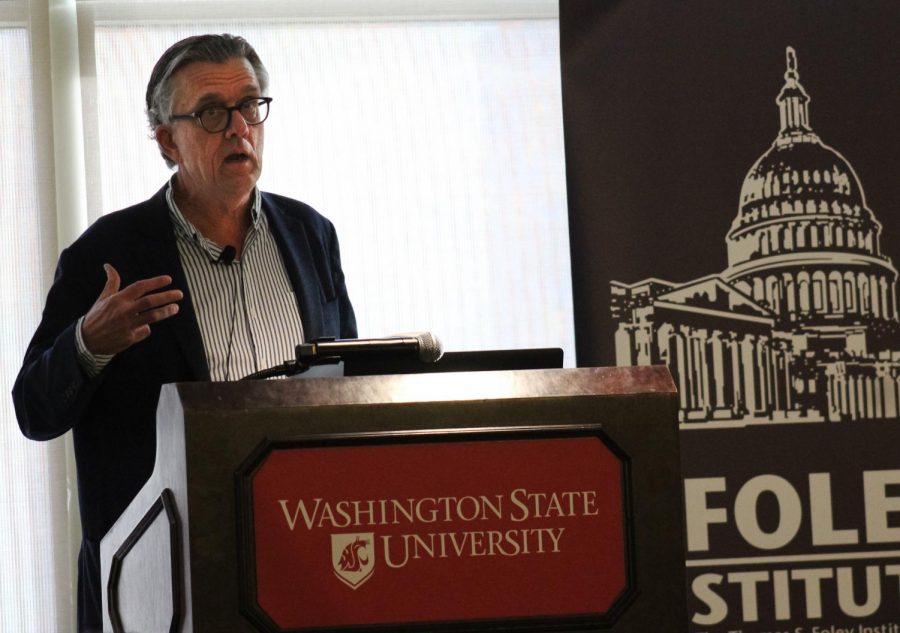 Kurt Andersen speaks about the border between opinion and fact in the age of fake news at the Foley Talk in the CUB Jr. Ballroom on Thursday afternoon.

Novelist Kurt Andersen shared how he believes America has fallen into a “Fantasyland,” one where facts are subjective and opinion rules all, with faculty and students Thursday in the CUB Junior Ballroom.

Andersen, who is the author of the New York Times bestselling book “Fantasyland: How America Went Haywire: A 500-Year History,” said although the idea of a “post-fact” world had become especially timely in recent years, America was essentially founded in the idea of rejecting the truth and believing whatever the mind can make up.

Andersen said he began writing “Fantasyland” in 2014, long before President Donald Trump had entered the political landscape. It was in the middle of writing the book that Trump became president and Andersen realized just how timely his work would be.

“He is leading a movement based on complete indifference to what is provable and true and what is wishful and false,” Andersen said.

However, he said, Trump is not a cause but a symptom of a phenomenon in American culture which has been building since the first Puritan settlers landed in North America in the 15th century.

“This post post-truth presence is just the extreme extrapolation and expression of a whole package of attitudes and instincts that have made America exceptional, for better as well as for worse, for its entire history,” Andersen said.

The Puritans, Andersen said, were essentially a cult who rejected Age of Reason English beliefs in science for witchcraft, satanic forces and biblical prophecies.

Southern settlers, although not as extremely religious as the Puritans, were equally overcome with ideas of riches and glory which were advertised in their home countries, Andersen said.

From there, he said, the U.S. was continually drawn into the ideas of the fantastical, which flourished during the 19th and 20th century with traveling sideshows, the creation of the circus and the peddling of cure-all medicines.

There were, of course, checks on the fantasy, Andersen said. Although hysterics and supernatural beliefs existed, they were largely not harmful. The government, academia and the media worked in part to keep the fantasy of the American mind grounded.

“Dream the impossible dream. Build it and they will come,” Andersen said. “Put the pedal to the metal, but play by the rules and don’t drink and drive.”

There was, however, a major two-part shift in the 19th century that allowed the fantasy to become the mainstream. The fantasyland, where facts are replaced with fabrications, can now exist anywhere and everywhere, he said.

“A senior physician at one of America’s most prestigious university hospitals promotes miracle cures on his TV show,” he said. “Major cable channels air documentaries treating mermaids, monsters, ghosts and angels as real. The irrational has become respectable and sometimes unstoppable.”

The first cause of this shift, Andersen said, was the counterculture movement of the 1960s. While the ’60s gave us free love and the civil rights movement, he said, it also gave us extreme Christianity, survivalism and conspiracy theories. He said what came out of the ’60s was the notion that whatever someone believes in is and can be their reality and that is okay.

The second phase, Andersen said, was the explosion of digital technology. The internet allowed people with extreme views to propagate and reinforce their beliefs.

“Believers in anything and everything can now find thousands, tens of thousands, of fellow fantasists who share their beliefs, along with tons of pseudo-facts to back those beliefs up,” he said.

Although Andersen believes this phenomenon is dangerous and a threat to our society, he is still an optimist. Nothing is inevitable, he said, and it is possible for America to regain its national composure and return to a society based in reality.

“We’re at a crossroads I think and we have choices to make,” he said. “It’s entirely possible that these last decades turn out to have been a phase, a kind of unfortunate episode, in the American experiment that we’ll move past and chalk up to experience.”