Cougars were held scoreless in overtime loss to Utah 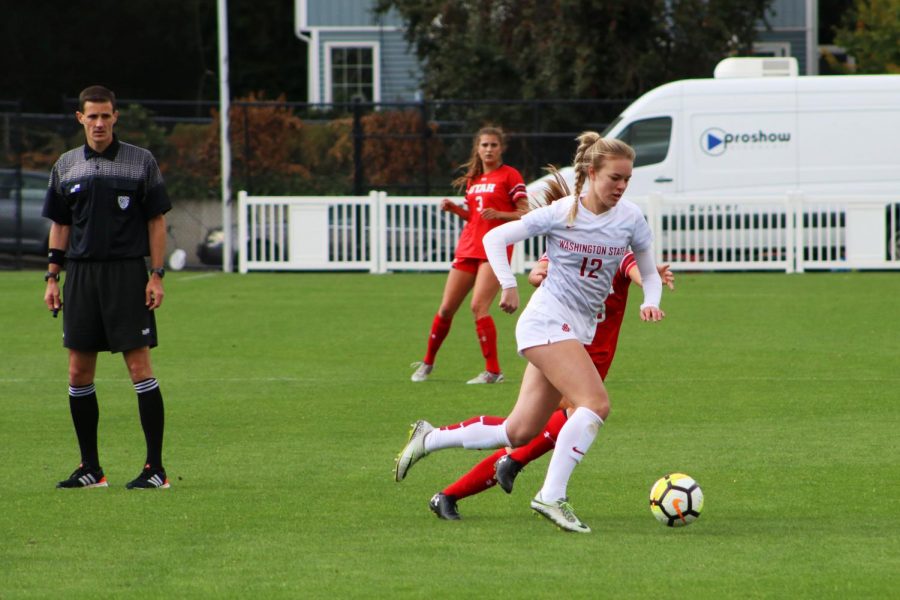 WSU sophomore forward Katie Jones gains control of the ball during a game against Utah on Oct. 1, 2017 at the Lower Soccer Field.

No. 7 WSU soccer fell just one goal short against University of Utah on Sunday, losing 1-0 and leading to another loss over the weekend. This was the first time the team has had back-to-back losses in nearly a year.

The Cougars traveled to Boulder, Colorado, on Thursday for their first road game after their victory against then-No. 8 University of California, Los Angeles at Wallis Annenberg Stadium. However, WSU was on the wrong side of the scoreboard as it lost to University of Colorado 3-1 for its first loss of the season.

After this loss, the Cougars traveled to Salt Lake City to fight for redemption. The end result was another loss on the road as the team struggled to find the net in both games.

The two teams challenged each other the entire game, resulting in no goals being scored by either at the end of the 90 minutes. This changed when the Cougars made a mistake in the early minutes of overtime resulting in a clear shot for Utah junior defender Holly Daugirda to finish the game.

Just before Daugirda’s goal, the Cougars held possession for the majority of the extra period. Sophomore forward Makamae Gomera-Stevens fired off two shots in this period, one being on target. However, these efforts were not enough to get the goal.

Gomera-Stevens led the team with six shots, three being on target, while redshirt junior goalkeeper Rachel Thompson had two saves for the entire game compared to Utah’s four saves. WSU held a 9-8 shot difference over Utah but could not manage to find the back of the net resulting in the 98-minute loss.

Coming out of the weekend with their first two losses of the season, the Cougars will need to make major adjustments for the rest of the Pac-12 competition as they will face No. 1 Stanford University and No. 2 University of Southern California.

The Cougars will return to Pullman to face USC 7 p.m. Saturday at the Lower Soccer Field.