Dressed in theme, runners compete in race alongside officers 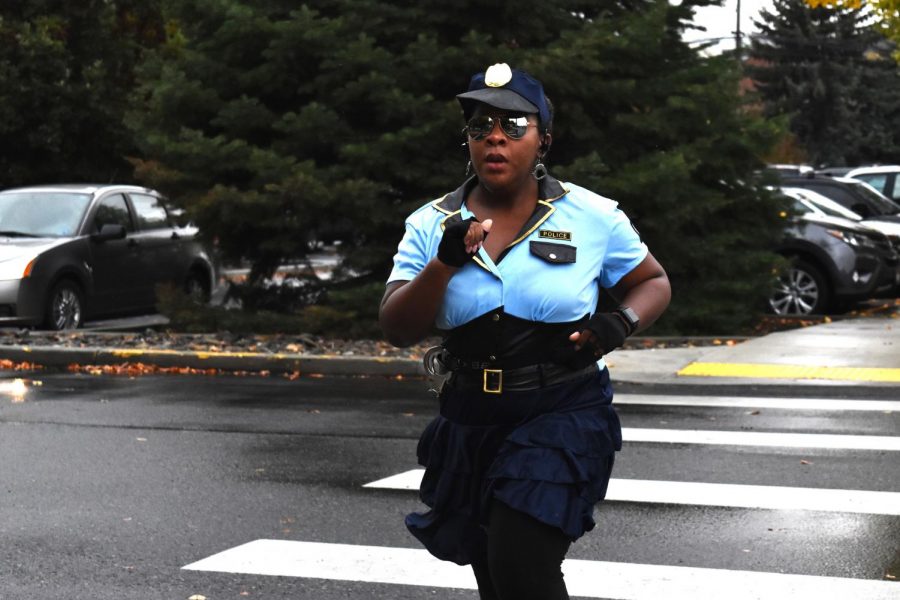 The City of Moscow put on its third annual Cops and Robbers 5K and 10K races Saturday in support of the Moscow chapter of the Fraternal Order of Police, a support group for police officers.

Recreation Supervisor Kellisa Owens has organized this event for the last two years and said she was glad to see people outside running while dressed up in their best cop or robber outfit.

“It’s cops and robbers because we’re supporting cops,” Owens said. “It’s a more specific dress attire, but it makes it more fun for everyone.”

Owens said that this race, like the triathlon she hosted last month, was very easy to set up with the extra help from the Latah County Auxiliary Communications team. They counted the racers as they passed, making sure each of them stayed well-hydrated.

“We were pretty set up and ready to rock,” Owens said. “At the 5K and 10K turnaround points, we were keeping track of how many people have gone through. So, we know exactly when to pack up and come back.”

Owens said fewer people attended and dressed up for this year when compared to the last, but some still put in their best effort this year in the mid-40 degree weather.

Heidi Armstrong and Mel Abrahams brought their children to compete in the 5K race. Each of them sported a bright orange shirt with an illustration of the jail from the board game Monopoly.

“I started a workout journey about a year and a half ago,” Armstrong said. “I started in August with the Lentil Festival. Last month we were down in Lewiston and this month we saw this and the thing said to dress like cops and robbers, so we did.”

Armstrong has run many races in the past, but said she ran her fastest race due to the nice, straight path along Chipman Trail. She also mentioned enjoying the race because of the police officers she was helping.

“From the interactions I’ve had, they’ve all been really great,” Armstrong said. “They really want to help the community.”

Abrahams was less seasoned than her friend as this race marked her first 5K. But she, along with her children, finished alongside Armstrong.

“I hate running but I still ran the whole thing,” Abrahams said. “It was great, actually.”

Trent Taylor considers himself a runner at heart, since he attended a number of races while living in his former hometown of Cincinnati, Ohio.

“We just moved here a couple months ago,” Taylor said. “So when we saw this posted in the City of Moscow Facebook page, we just wanted a good way to get out and see more.”

Taylor said he would have worn a costume but the rain pushed him to wear his normal running attire. Despite the weather, he said the scenery of the trail was beautiful, rivaling the sights he saw while running in Ohio.

“They both have beautiful scenery that you don’t get in other places,” Taylor said. “It’s been nice going both ways.”

As each runner finished their race, they all huddled around a white tent providing sandwiches, fruit and cookies.

Owens recalled her favorite moment of the race was seeing a police officer in full uniform running alongside the other participants.

“It’s great to see police officers come out and this interaction with the runners,” Owens said.