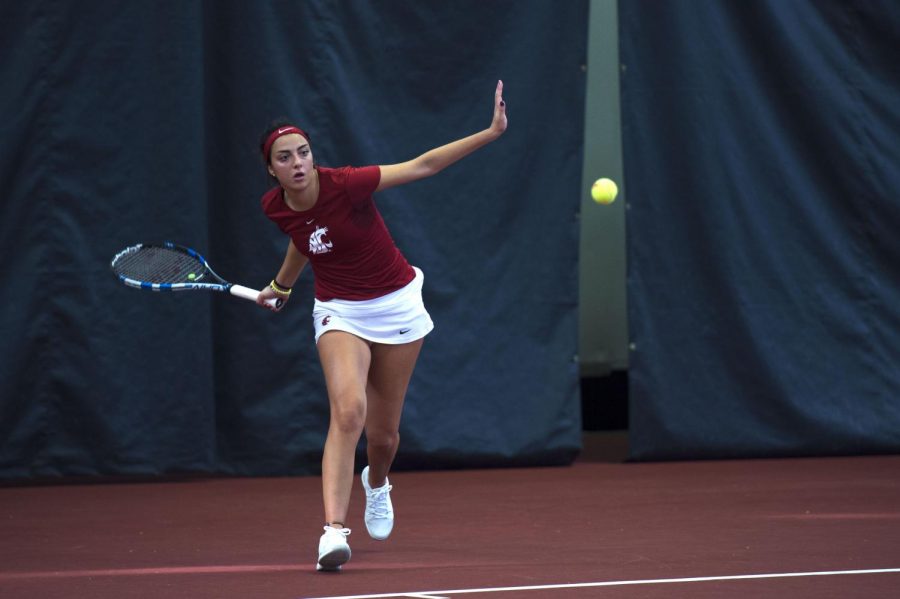 Then-junior Tiffany Mylonas prepares to strike the ball during a game against Purdue on Feb. 3 2018 in Pullman

Friday resulted in the Cougars winning four of their six singles matches. Among the singles winners was Mylonas, who was the only Flight A participant to make it through to the second round beating senior Skyla Alcon of California State University, Northridge.

In the Flight B singles, both freshman Yang Lee and junior Melisa Ates recorded straight-set wins against their opponents to move onto Saturday’s event. In the Flight C singles, senior Aneta Miksovska won her match against Cal State Northridge.

Day one also saw success for both WSU Flight A squads in the doubles bracket. The first WSU team had Mylonas and Sato face off against Grand Canyon University for the first-round win. Their second match win was against Cal State Northridge.

Both Flight A singles winners of Friday were successful Saturday, with Mylonas and Sato picking up a pair of wins. The same story went for Flight B’s Ates and Lee and Flight C’s Miksovska, who advanced to Sunday’s finals as well. Junior Ege Tomey picked up a win Saturday advancing her to Sunday’s consolation finals.

In the doubles play on Saturday, the dominating Flight A duo Mylonas and Sato had a 6-1 win over California State University, Long Beach. Flight B doubles also saw success with Ates and Tomey getting the 6-4 win over the team from Loyola Marymount University.

As the tournament came to a close Sunday afternoon the Cougs came out with a handful of victories. In the Flight A singles bracket Mylonas won the title and in doubles play Mylonas and Sato defeated Long Beach 6-3, taking another championship win.

Flight B singles had Lee and Ates defeating their opponents from Long Beach and Northridge respectively. The two then went on in their B Flight championship match to defeat Portland State 6-3.

The Cougs’ next event will be Oct. 18-22 at the ITA/Northwest Regional Championships in Stanford, California.