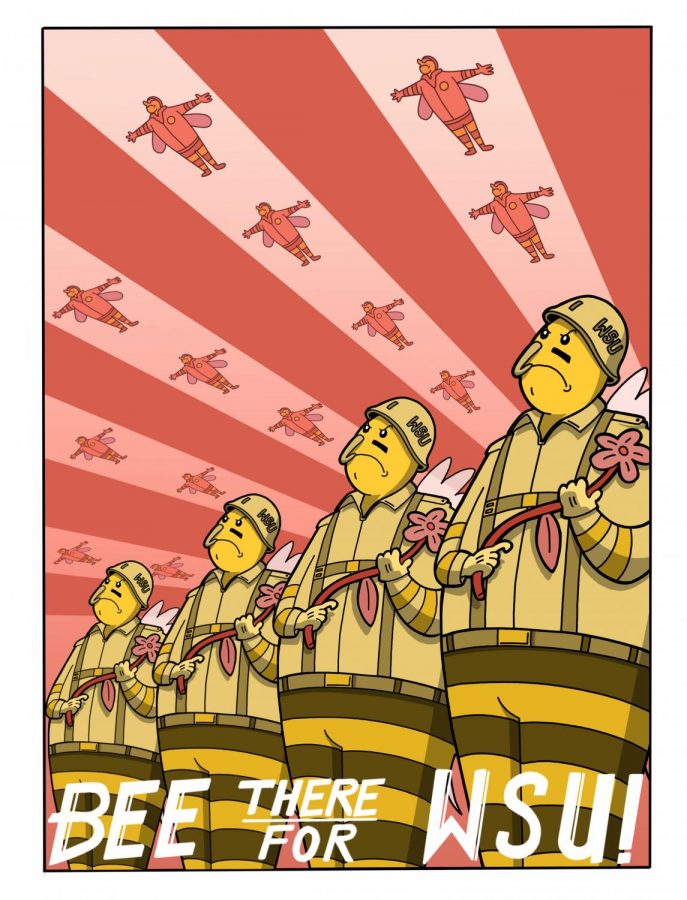 It seems as though donator money is not used for improving facilities, but a genetic super army ... and cute bee uniforms.

WSU’s bee research facilities recently received a $1 million donation. While it is supposedly for a new building, it’s an open secret that the donation is meant to speed up the process of creating a bee army.

Due to the staggering rate of bee populations declining, a lot of people have started to raise awareness for the bees. After researching bees since 196l, WSU has decided to change its approach and be a little more aggressive in its efforts.

In the beginning, the bee army was a top-secret project. However, it all changed when the file name of the project, “Totally Not the Super-Duper Top-Secret Plan to Create a Glorious Bee Army,” was leaked.

“It was by far the most chal­lenging task our club had faced,” Buzzington said. “It took weeks of analyzation, but once we finally figured out what the title meant, we couldn’t bee-lieve it.”

Because of this club’s research, the bee army is the university’s open secret. While it still will be a decade or so until the swarm is ready to run its first public tests, researcher and bee expert Honey Po said it’s progressing quickly.

“This donation has sped up the process more than anyone could have hoped for,” Po said. “The new building is a nice front, but we’re focusing on the bees … we’re even working on cute little uniforms to add to the whole ‘army of bees’ aesthetic.”

Of course, there are some opponents of the insect army who have their concerns about what an army of bees may entail.

“I’m deathly allergic to bees,” said Berry Buzzkillington. “One sting and I’m out of here.”

While Smith conceded he knew bees played a role in the ecosystem, he believed “real” sweet honey-makers were over­rated.

“We could just make some robot bees,” Smith said. “Yeah, they might get hacked or some­thing, but I’d rather have a giant swarm controlled by some hacker in Russia attacking the White House than deal with a swarm of bees stinging me.”

Those in favor of a bee army said concerns such as deadly allergic reactions are not import­ant when faced with the possibil­ity of a totally awesome army of insects.

People are hoping the army of bees will turn out to be the bee’s knees.