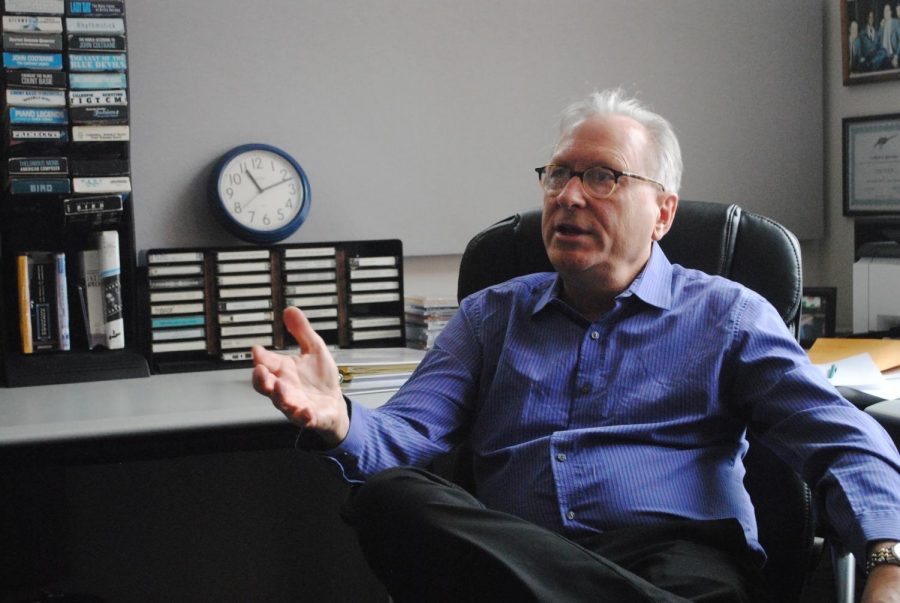 “I have always wanted to write music for the movies, but never had the opportunity,” professor Greg Yasinitsky says as he discusses the music he wrote for “The Cross-Up” Monday at Kimbrough Music Building.

In the new short film “The Cross-Up,” a WSU professor composed and performed the complete soundtrack for the film which released in February.

Greg Yasinitsky, a professor of music, saxophone, composition and jazz studies at WSU, originally became involved with the project when his childhood friend and screenwriter Jerry Hauck was discussing the need for a composer.

“I have always wanted to write music for the movies, but never had the opportunity,” Yasinitsky said. “This was sort of serendipitous.”

Yasinitsky’s connection to the writer gave him the opportunity, but he was chosen because of his extensive background in music, he said.

The 22-minute film, directed by Eddie Velez, was featured in multiple film festivals as well as screenings in Los Angeles. It is now available on Amazon Prime.

The movie is a comedy about a mafia-like character receiving a visit from God to turn his life around.

The entire process for creating the soundtrack took approximately a year, Yasinitsky said. This involved writing the music, recording and having the directors review the soundtrack among other steps.

Much of Yasinitsky’s work was done at WSU, he said.

“We have great musicians here at WSU and a great recording studio just down the hall,” he said. “I thought if I put this together, we can use the people here.”

Most of the soundtrack was recorded acoustically rather than electronically because he wanted the movie to have a unique soundtrack that was different from most movies created recently, he said.

“I was really lucky. [The directors] liked everything right away,” Yasinitsky said. “They wanted to use the electronic version, but I said, ‘No, we want to use real musicians to make it sound better.’ ”

The movie has religious themes so the soundtrack features the organ, gospel-style music and a jazz element, he said.

Yasinitsky specializes in saxophone and jazz composition. He has composed several pieces of music and has performed in more than 40 countries.

“Music is universal,” he said. “You can find it in any culture in the world,”

He joined the faculty at WSU in 1982 and is the only Regents professor in the arts. Yasinitsky also directed the jazz band for 30 years.

He served as the School of Music Director from 2011 until he stepped down from the position in April.

Despite the excitement of composing a soundtrack for a movie and working on other projects, Yasinitsky said he loves his work teaching students at the university.

“The best part is working with all the talented students and seeing what they do with their careers,” Yasinitsky said. “A lot of them are touring the world playing, they are recording artists and teaching at universities all over the place.”