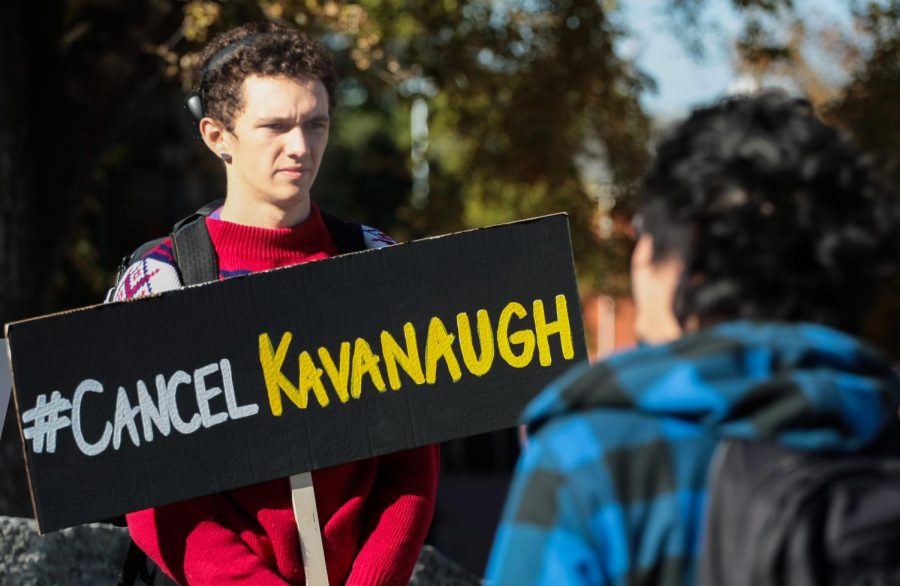 Brett Kavanaugh was confirmed on Saturday as the 114th Supreme Court justice.

Kavanaugh’s confirmation is more than just a f-ck you to Democrats. To myself and many other survivors of sexual violence, the Kavanaugh confirmation is the answer to a question we have been wrestling with for years: Would I be believed if I came forward?

This confirmation set a precedent for how sexual assault will be handled in this country. Kavanaugh’s appointment is a total invalidation of our hellish experience as survivors. It seems my humanity, according to the Republican Party, lasts from the moment of my conception up until the moment I am sexually assaulted, at which point I go from a “precious life,” to a “lying, hysterical sl-t.”

The way elected officials discuss sexual assault survivors is despicable. Sexual assault is traumatic. Our everlasting psychological bruises should not be used as a dart board for the Commander in Chief of the armed forces.

“Every single day you wake up it’s like a new reminder from a different person in charge of our country that they don’t care about women,” said Emma Troutman, senior public relations major and sexual assault survivor.

One of the main questions Christine Blasey Ford, clinical psychology professor at Palo Alto University and former classmate of Kavanaugh’s, is constantly being asked by the public is, “Why didn’t you report earlier?”

The realities of reporting rape are distinctly more complex than anyone who hasn’t been raped could imagine. Reporting rape is reliving your trauma to someone who may or may not sympathize or believe you.

When it came to filing a police report I was relatively lucky. When the police came to my high school to interview me about my abuser, the first thing the officers said was, “This isn’t your fault and what happened to you was a crime.” They were kind, compassionate and made me feel comfortable.

Many women are not so lucky.

In 2017 when Troutman arrived at Pullman Regional Hospital and told nursing staff she had been drugged and raped, a nurse told Troutman, “Don’t say that. I have a daughter and you are making me sad.”

The way her trauma was dismissed made her feel like she was screaming and nobody could hear her, Troutman said.

“For me personally, I felt like it was my fault and it was really confusing,” said Sarah Hachman, sophomore zoology major and sexual assault survivor. “When it happened to me I wanted to get out of my own skin. I didn’t want to be who I am.”

If the Senate confirmation hearings are any indicator of the type of reception Hachman would have received, it’s no wonder her first thought was to blame herself. Girls are raised in a world that tells 16-year-olds not to wear spaghetti straps because it will be their fault if their male classmates are distracted.

This environment breeds women who will blame themselves for their own rapes.

Sexual assault isn’t over when it stops happening physically. The so-called “20 minutes of action” can derail the course of a person’s life forever.

“The rest of my life, I can now never go outside alone at night without having a panic attack,” said Kayla Brown, senior English education major and sexual assault survivor. “I can never hear about these stories without reliving mine. Every time.”

There is this idea that is presented all over the media of a perfect victim: a girl, usually white, who is a virgin and never gone to parties, never done drugs and never drank alcohol.

I was all of those things. I did everything girls today are told about avoiding sexual assault.

This perfect victim is what all sexual assault survivors are told they must be in order to be believable and yet the validity of my story is still called into question. If there is a particle count on the amount of his skin that needs to be under our fingernails for our stories to be seen as believable, the least lawmakers could do would be to give us that number.

Whenever rape cases are brought up in the news, regardless of the amount of evidence, it never seems to be enough to risk putting a blot on a rapist’s reputation.

As survivors, we want to know when the right time is to come forward. When is our basic human dignity worth more than being sandwiched between “dredging up the past” and “not ruining his bright future?”

There will never be a time when the men in our government, in our schools and in our lives will be comfortable with addressing the epidemic of violence against women and the part each of them played in it.

I am tired of listening to men who have never been sexually assaulted talk about their thoughts on the validity of Ford’s testimony. I am tired of men who ask, “In the age of #MeToo, can I even talk to women?”

“People don’t complain about stricter laws against like murdering people,” said Erika Dvorak, junior sociology major and sexual assault survivor. “Nobody is like, ‘It’s like I can’t even talk to people anymore. I might go to jail for murdering them.’ ”

It is unequivocally not a “difficult time for men.”

I and so many others are emotionally exhausted from carrying the burden of silence. It is not enough to simply believe Ford. You have to care too. You have to value the basic human dignity of a woman over the job prospects of a man.

So, to the opinionated male non-survivors, shut your mouths and open your ears. We have reached epidemic levels of sexual violence in this country and you need to start to care.

The very least you can do is to treat women as if their lives matter and their stories are worth listening to. Allow the women in your life to speak about trauma uninterrupted. And for the love of god, get your hands off our mouths.