WSU takes on Cardinal, Golden Bears in California over weekend 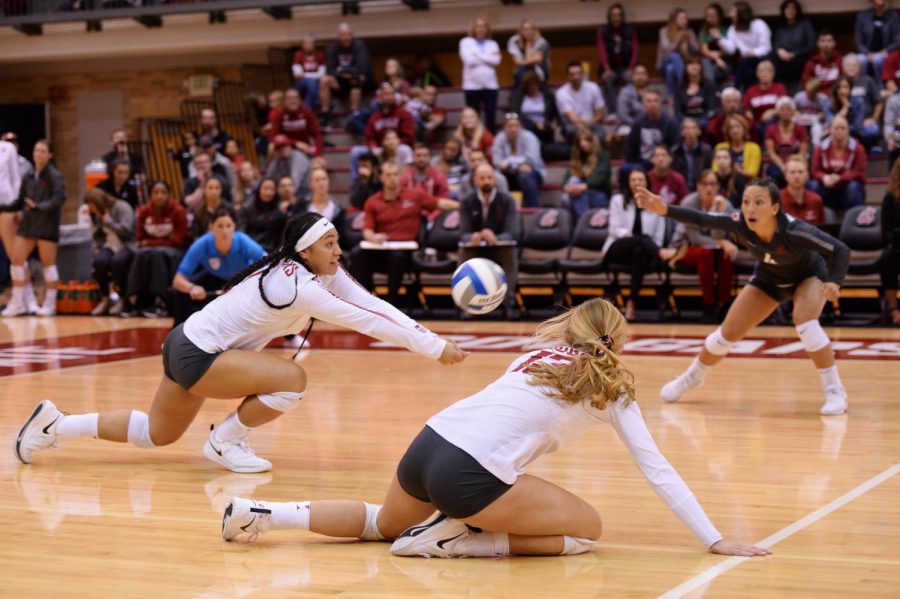 Sophomore outside hitter Penny Tusa attempts to receive a strike from the University of Colorado on Sept 30. in Bohler Gym.

The Cougars (13-3, 4-2) most recently snagged a comeback victory against then-No. 21 University of Arizona on Sunday. The team was down 2-0 after the second set and trailing in the third before finding a way to come back and win three straight sets to take the match.

Head Coach Jen Greeny credited the Wildcats (14-4, 3-3) with serving tough balls and passing really well, while the Cougs were doing neither of those two things.

“We were pretty much dead in the water,” Greeny said.

So far this year, the team has made big runs to gain momentum and close out the other team and it was more of the same in both of their previous matches. A 3-0 sweep of Arizona State University (13-5, 4-2) last Friday required a big rally in the second set to come back and win it.

Greeny said getting two wins on the road is a huge accomplishment and they will take that any time or way they can get it. That being said, she wants the team to put everything together and clean it all up.

Of the past four match wins, Greeny said each one has been different. She said a little bit of everything has contributed to their success whether it was good passing or tough serving.

“It would be nice to put all of those skills together and be a little more consistent,” Greeny said.

The Cougars are working toward being better and more consistent in every category, every single week, she said, and the two main areas where she really wants to see improvement are serving and blocking.

Greeny said Woodford has taken advantage of every opportunity she has been given and for her to do it in front of so many friends and family in Arizona was special.

“Huge congratulations to [Woodford] to get that milestone,” Greeny said. “Especially being hurt last year, her recovery and work ethic all spring, summer and fall has been tremendous.”

She said they need Woodford to continue to be great for the rest of the season to keep having success.

The Cougars road trip this weekend will begin with a trip down to Palo Alto, California, to take on No. 2 Stanford University. Greeny said the Cardinal (14-1, 6-0) are an extremely tough team with great, well-rounded players.

WSU will then travel across the San Francisco Bay to battle the University of California, Berkeley. The Golden Bears (9-8, 1-5) are coming off a big win against University of Utah and will bring a lot of momentum into their match with the Cougars.

WSU will play Stanford at 8 p.m. Friday in Maples Pavilion and Cal at 1 p.m. Sunday in Haas Pavilion. The Cougars game against the Cardinal can also be seen live on Pac-12 Networks.