Leveling the playing field with self defense 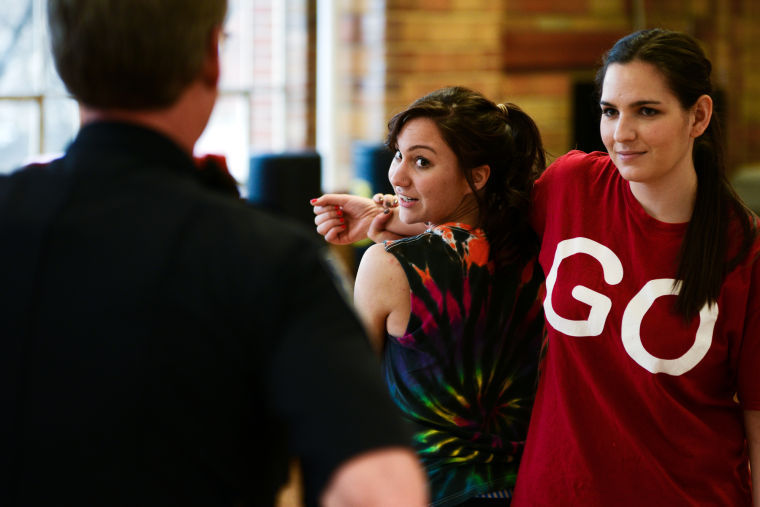 When it comes to defending yourself from sexual assault, there’s no such thing as fighting dirty.

I had the privilege of participating in a self-defense class with Pullman Police Officer Greg Umbright alongside our opinion editor, Dominique Wald. We literally tackled the physical and psychological elements of defense as he walked us through different environments and scenarios.

Since the average woman isn’t as physically strong as the average man, Umbright showed us how to level the playing field: by fighting smarter.

Umbright said that in many situations, safety comes down to mental preparedness.

He broke down the different levels of awareness anyone, especially women, should have in different given scenarios.

The first level is the relaxation we might feel while at home with a roommate and a locked door. Umbright called the second level a “casual awareness,” or the alertness one should demonstrate walking home alone at night.

He described the third level of awareness as any event that inspires the thought, “What would I do if?” If your gut instinct indicates that something is off, or if you feel the person walking behind you might be following you, it’s time to come up with a plan, he said.

This degree of mental preparedness will help if the situation escalates to one requiring the fourth level: a physical response. Once you know you’re in danger, it’s time to scream, run, and if it comes down to it, fight smart.

A fair fight between a larger perpetrator and a smaller target is not a fair fight, so to level the playing field you should be prepared to strike back strategically.

Umbright demonstrated this in an arm wrestling matchup with Dominique, which he won handily. No pun intended. But when she used her whole hand to wrestle just his pinky, the tables turned. This competition served as the theme for the physical portion of the class: target the weak spots.

Umbright said that striking an attacker’s soft points with your hard points is a good rule of thumb. Close-range, I learned that an elbow to the jaw and a knee to the groin, preferably in quick succession, serve as effective methods of fighting off an attacker. From farther away, kicks to the kneecaps, shins and groin, punches to the throat and jaw, and fingers to the eyes could help put some distance between yourself and the attacker.

If you end up on the ground, Umbright said to get on your back and buck your hips while targeting the soft points on the attacker’s head and torso. From there, it’s easier to get back on your feet and running than from a facedown position, he said.

It’s one thing to be “assaulted” in a gymnasium with a police officer and a coworker. The real deal is another thing entirely, which is why Umbright emphasized the importance of muscle memory when learning self-defense. It’s not enough to just learn a few moves. You need to repeat them, over and over in your head, to be able to execute an effective defense in a high-pressure situation.

This class was valuable, and while I hope I’ll never have to put Umbright’s lessons to the test, I feel safer for having learned them. With that in mind, it would be selfish of me to keep this newfound knowledge to myself.

Words on a page are just that: words. I learn by doing, not by reading, and I’d like to offer a solution for the Cougar women who share my learning style.

The Daily Evergreen will host a self-defense class next week with Officer Umbright free of charge and open to the public. For the time, date and location check www.facebook.com/thedailyevergreen this weekend.