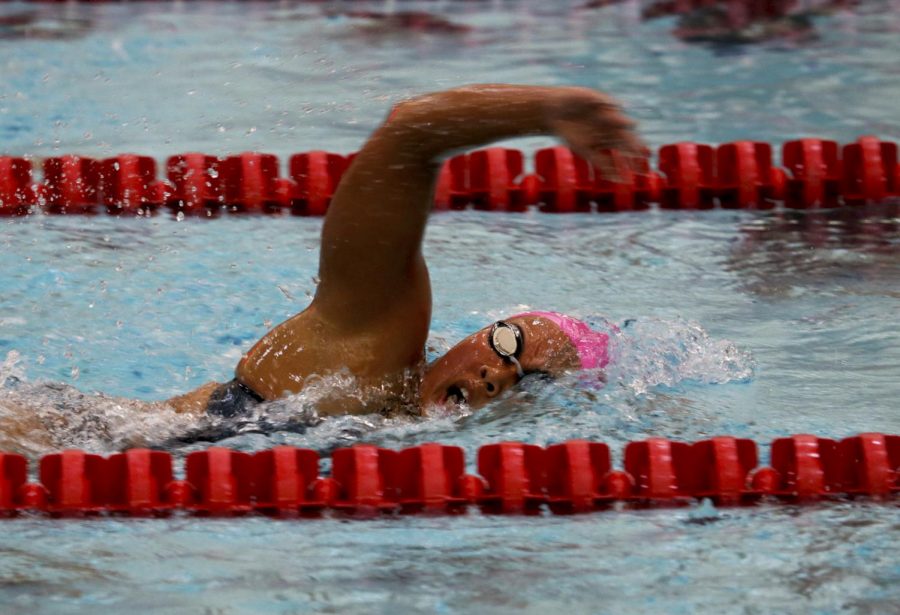 WSU women’s swim competed at home in Gibb Pool for the first time this season against No. 1 Stanford University.

Of the top 10 individual-scoring athletes from the combined teams, Stanford had eight of those slots. The highest-scoring WSU swimmer was sophomore Taylor McCoy with 10 points. Placing as the highest-scoring individual for Stanford was a three-way tie for 18 points a piece between sophomore Lauren Pitzer, freshman Lucie Nordmann and freshman Taylor Ruck.

Both teams competed in a total of 14 races, in which Stanford took first in every single event.

Racing times also hit the Cougs hard. In the 1000-yard freestyle, the closest WSU came was 22 seconds behind the top-three placing Stanford swimmers.

In the 200-yard backstroke the closest WSU got was seven seconds behind Stanford junior Erin Voss. A heavier hit came in the 500-yard freestyle, which saw WSU’s closest contender junior Ryan Falk lose by 15 seconds to Pitzer.

The Cougars came close to taking first place in a couple events, but the overall matchup was too much for them to catch up to Stanford.

“We’re a little bit under-gunned but we’re going to keep working on that every day,”  WSU Head Coach Matt Leach said. “From start to finish it was just a learning curve for our program and I hope next time we get in on Sunday against Boise State we can show just a little bit better improvement.”

After the loss at home, WSU is now 1-1 to Stanford’s 2-0. Despite the loss, the Cougs will be taking a couple deep breaths and hosting again at 10 a.m. Sunday against the Boise State University Broncos.