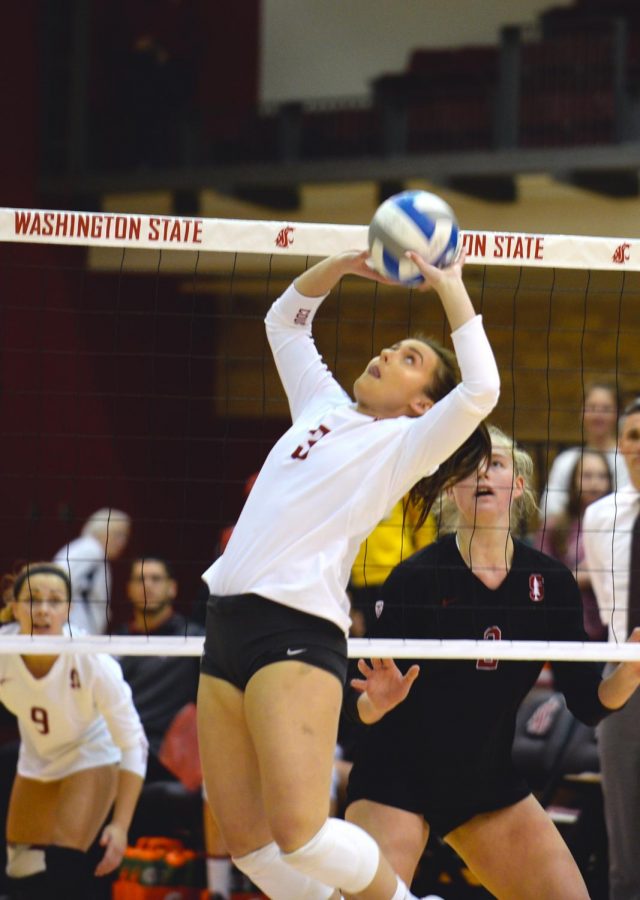 No. 21 WSU volleyball fell to No. 2 Stanford in three straight sets Friday night at Maples Pavilion.

The Cardinal (15-1) came out hot, starting the first set up 10-4 early against the Cougars (13-4). WSU started to adjust, however, cutting into the Cardinal lead but still trailing 18-12.

From there Stanford finished the set without much trouble, winning by a final tally of 25-15. The first set wasn’t all lost though — WSU learned something and came out looking better in the second set.

Down one set to zero, the Cougs started the second set up 5-3. Stanford came back and tied the set 8-8, but WSU kept on pushing on to gain small leads. The largest lead of the set came at 22-18.

Head Coach Jen Greeny was forced to call a timeout when the Cardinal stormed back and tied it at 22. Senior outside hitter Taylor Mims went out with an injury and the Cougs couldn’t finish the set.

A hard-fought 30-28 loss put the Cougars down two sets to none and without Mims, they had a steep hill to climb.

Stanford flexed its muscles in the third set, showing why the team is ranked No. 2 in the nation. The Cardinal got an early 6-1 lead and never looked back. It extended the lead to 15-7 and eventually won the set 25-12.

Mims finished the match with 12 kills but didn’t come back after her second-set injury, and will be someone to keep an eye on as WSU looks to get a new win streak started in its next match.

The Cougars’ next match will take place against University of California, Berkeley, at 1 p.m. Sunday at Haas Pavilion.