Soccer comes close but ultimately loses to Trojans at home 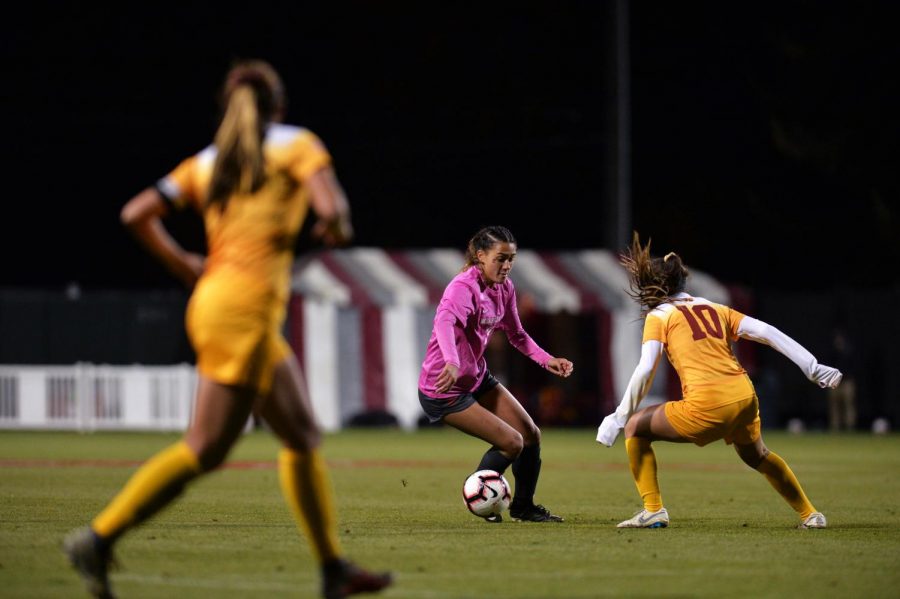 Sophomore forward Makamae Gomera-Stevens dodges a defender in the game against USC Saturday night at the Lower Soccer Field.

No. 19 WSU soccer lost its first game at home this season against No. 2 University of Southern California 3-2 Saturday night in a high intensity matchup.

The Cougars have now lost three straight games after starting the season 10-0. This is WSU’s longest losing streak since they dropped three consecutive matches in 2016.

Head Coach Todd Shulenberger said the end result was a Cougar loss but the team put together a great effort the entire 90 minutes and he is proud of the Cougars performance.

“Quite honestly they’re a great team and their the second-best team in the country,” Shulenberger said. “I liked our effort so we’ll have to regroup and move forward. I’m disappointed we lost don’t get me wrong but if we’re going to play like this in the next five games then we’re going to be one dangerous team.”

USC senior forward Leah Pruitt scored the first goal of the night in the 37th minute on a penalty shot after a foul on WSU freshman defender Mykiaa Minniss. This goal was the only goal scored in the 45-minute half.

The first half was a battle for possession of the ball as both teams took turns exchanging shots at the goal. WSU put up nine shots with one save by redshirt junior goalkeeper Rachel Thompson compared to USC’s 10 shots and two saves.

USC sophomore midfielder Alea Hyatt scored the team’s second goal of the night in the 54th minute. Immediately after senior forward Morgan Weaver had high intensity as she attacked the goal and came into contact with USC junior midfielder Ashleigh Plumptre, resulting in a goal off of a penalty kick scored by senior defender Maddy Haro.

“I saw [the goalkeeper] kind of take a step to try and cheat herself to go to her right,” Haro said while describing the penalty kick goal, “and the whistle blew then I took a deep breath and then right down the middle.”

After this goal, WSU was hungry for another score as they attacked the Trojans defense multiple times and fired shots at the USC net. The Cougars held possession for the majority of the next 10 minutes, however, when USC gained possession, freshman forward Penelope Hocking scored a header in the 63rd minute for the Trojans third goal of the night.

A foul by USC lead to the Cougars second goal of the night in the 72nd minute. As Haro lined up for a free kick, booted it into the penalty box and the ball was deflected by the USC goalkeeper, leading freshman forward Molly Myers to place a shot into to the back of the Trojans net. That would end the scoring for the night and with it the Cougs perfect home record.

The Cougars will travel to Tempe to face Arizona State University at 11 a.m. Thursday as they attempt to end their three-game losing streak.