Saving the county fair this weekend, one beer at a time 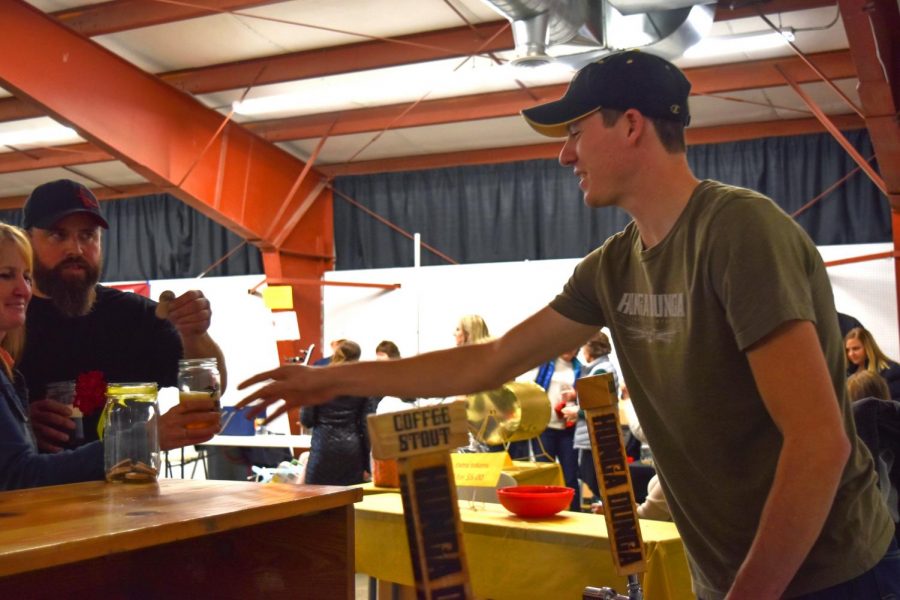 Anthony Lambregts, an employee at Hunga Dunga Brewing, serves one of the two popular brews for an event member at Brewersfest on Saturday in Moscow.

Jim Logan works as the Latah County Fairgrounds and Events Center director and has done so for over three years. He said despite organizing multiple companies and sponsors, Brewersfest was fairly easy to set up.

“We sent out the invitations and they said, ‘Yes, sign us up,’ ” Logan said. “Our emphasis [is] local. We invited all the microbreweries in Latah County. And then once we’d invited them, we expanded to Summit Cider in Coeur d’Alene and Riverport in Clarkston.”

Logan said the local feel also extended to the performing artists and food trucks, which were also part of the Moscow community.

The proceeds of Brewersfest contribute to the county fair that Latah puts on each year. Logan said without the funding from events, he wouldn’t be able to accomplish all that he needs to, such as opening a commercial kitchen and repairing the barns he uses for the fair.

“We’re the last free fair in Moscow,” Logan said. “We have never charged and I never want to charge. It’s events like this that help our operating budgets throughout the year.”

Casey Holcomb spent the last year and a half on the United Way Board and said she was happy to partner with the Latah County Fair to raise money for its important mission.

“The United Way is a nonprofit that supports other nonprofits,” Holcomb said. “Let’s say someone wants to donate to nonprofits, but they don’t know where their money will have the biggest impact in the community. We don’t decide for them, but we support the nonprofits in the most need for that particular year.”

The United Way supports organizations such as Palouse Pathways, Idaho Food Bank, Alternative to Violence of the Palouse, Habitat for Humanity and others, according to the United Way of Moscow/Latah County’s official website.

Holcomb said she was surprised how many people showed up to Brewersfest within the first couple of hours of the event. She said she expects to return again next year.

It wasn’t long before both the indoor and outdoor spaces of the community center were filled with people enjoying the beer, cider and wine provided.

Andy Severson, Moscow Brewing Company co-owner, came to Brewersfest to represent his business. Severson said he had a part in organizing the event.

“We know the people who are coordinating it,” Severson said. “Since it was their first time doing it, they asked us for help to show them what a brew fest looks like. We were happy to help out.”

Severson brought Moscow Brewing Company’s Imperial Hazy IPA and their Kolsch ale to sample. He said he was surprised there hasn’t been a similar event in the past.

“There is so much beer in this area, between Moscow, Pullman and Clarkston,” Severson said. “There is no reason not to have a brew fest. Moscow is the best location for it.”

Each company in attendance showcased numerous drinks to the patrons shuffling around the room. With only five free drinks with admission, some had difficulty choosing which to try.

Logan said it would take time to figure out how much money the event contributed to the fair and United Way, but is optimistic about the future for both of the companies.

“Based on our advanced ticket sales alone, this will be an annual thing,” Logan said. “We did well with presales. As of this exact moment, it’s a success.”