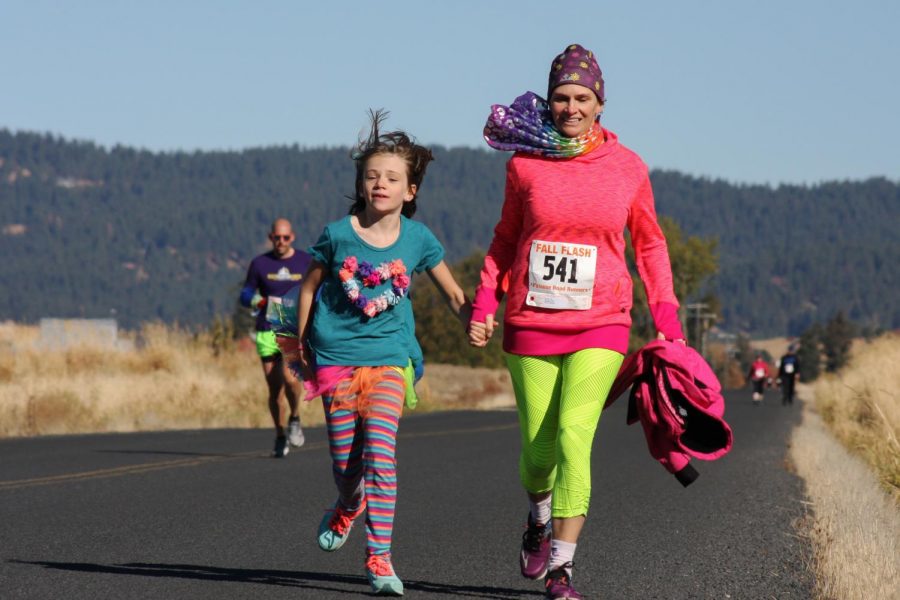 Emily Spellman, right, and her daughter Maya reach the end of the 5K run for the Fall Flash of the Palouse event Sunday in Moscow. Emily won a Flashy Award for donning bright attire after finishing the race with a time of 44:40.

Ben Calabretta, the race director for Fall Flash of the Palouse, started this year’s race off with a bang — literally, by firing the first shot of the last race for the running season.

After three years of being in charge of the Fall Flash, he and his volunteers knew exactly what needed to be done.

Most of the volunteers are members of the community who are excited about running, and Ed Coulter is no different. Calabretta brought Coulter onto the volunteer staff because of his experience being a track coach.

Since Calabretta became the race director for the Fall Flash three years ago, he has been reaching out to members of the community like Coulter to participate.

“We come to help,” Coulter said. “We come because we care.”

The entire event was developed in order to bring the community together and provide a family-friendly opportunity for children to enjoy what the Palouse has to offer, Calabretta said.

“I do this because I love it,” Calabretta said. “The whole point is to see the community come together and have fun.”

Palouse Road Runners, the nonprofit organization responsible for the event, echoed Calabretta’s sentiment. The group’s main goals are to promote healthy running and local businesses and bring community members together, according to their website.

The organization keeps the costs as minimal as possible with profits from the run going back into the community, Calabretta said.

“We don’t do this for the money,” Calabretta said. “We do this to have a good time and to run.”

Fall Flash typically gets at least one sponsor to help provide food and other essentials to put on a good race. The group also gets funding from memberships, allowing runners to participate in any of the races put on by the Palouse Road Runners, according to their website.

Although this is the last major event put on by the Palouse Road Runners for this running season, the organization hosts four annual runs throughout the year: Snake River Canyon Half Marathon, Palouse 100K Relay & Solo, Moscow Mountain Madness and the Fall Flash, Calabretta said.

Another one of the main goals is to get kids involved by helping them develop a healthy habit and love for running, Calabretta said. They even hosted a kids’ fun run after the main Fall Flash competition to encourage children of all ages to participate.

This year was a particularly special year, as Devon Bortfeld, recent WSU psychology graduate and former member of the cross country team, broke the 10K record for this course, according to Calabretta, finishing the race in 36:02. The previous record was held by Emma Kertesz, also a Pullman resident, who finished in 38:15, according to Fall Flash’s website.