No. 21 Cougars fall to Cal Berkeley on road

WSU defeated in four sets; Taylor Mims did not play due to injury 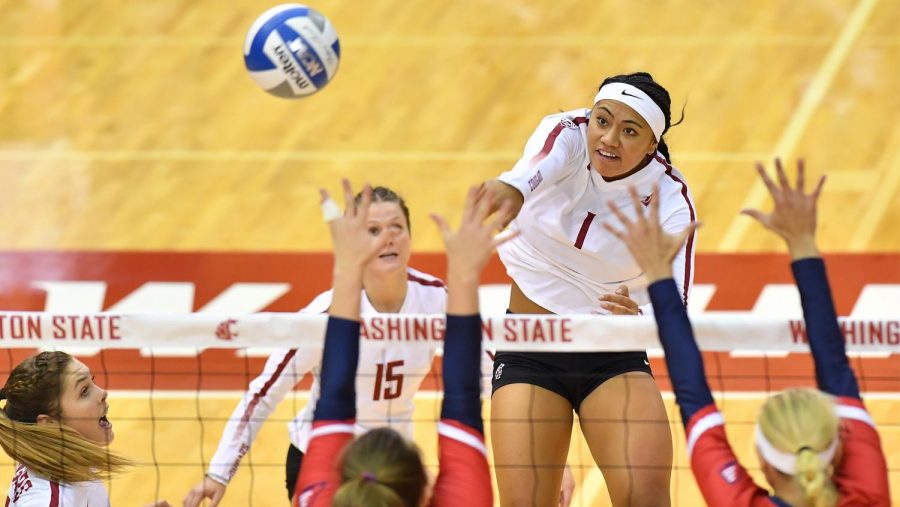 Sophomore outside hitter Penny Tusa was one of the leaders of the game with 14 kills, two aces and three blocks.

No. 21 WSU volleyball lost in four sets to the University of California, Berkeley, on Sunday afternoon.

Without senior outside hitter Taylor Mims, who sustained an injury in Friday’s match against No. 2 Stanford University, other players had to step up.

The first set was similar to the second against the Cardinal on Friday — a hard-fought set that saw the Cougars lose a late lead and end up losing the set.

After a 32-30 loss putting them down 1-0, WSU came out strong in the second set, going on large runs to extend its lead. The team ended up winning the second set 25-15 in dominant fashion, tying the match going into the third set.

Set three was another back-and-forth contest that stayed close the entire time. Cal eventually took the set by a final of 25-23, putting the Cougs down 2-1.

WSU has been down before during this season and came back to win or at least force a fifth set, so this was no new place for them. The beginning of the fourth set started just how the first and third had gone: both teams exchanging points and going on short runs.

The Cougs called a timeout down 11-8 after a 4-0 run by the Golden Bears, but the timeout didn’t do much to stop the bleeding. Cal extended its lead to 21-13 before WSU started a run of its own.

However, it was not enough as the Cougars fell by a final of 25-20 in the fourth and final set of the match.

Two straight losses and losing a star player was not the way WSU likely wanted to end its four-game road stretch, but the team can look forward to coming back home and playing in Bohler Gym.

The next match will take place in front of the Cougars home fans at 8 p.m. Friday against the University of Southern California.