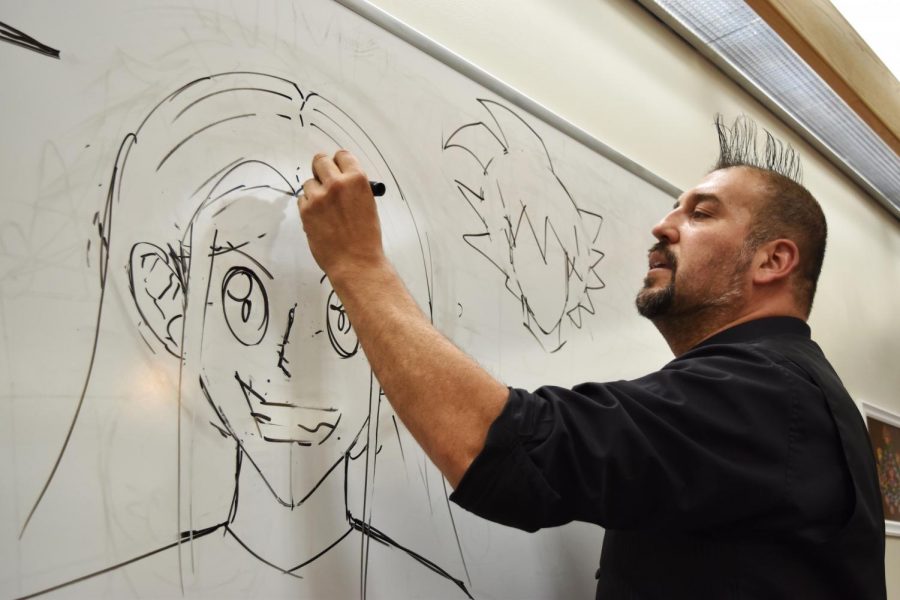 Renowned artist Carlos Nieto III teaches a group of youngsters around ages 11 to 15 how to create their very own stylized anime characters Monday evening in the Neill Public Library.

Nearly 50 children ranging in age from around 11 to 15 years old showed up to draw and learn for an art program hosted by Neill Public Library on Monday. Artist Carlos Nieto III, known for his work on “The Simpsons” and “King of the Hill” led the participants in a step-by-step class on how to draw characters in the anime art style.

“Drawing should not be something that is difficult,” Nieto said. “It should be fun and it should be a challenge.”

Nieto contacted Youth Services Librarian Kathleen Ahern late in the summer to begin the process for creating the “Anime Your Way” event. Ahern said she did not hesitate when agreeing to host the event. The library’s anime collection is very popular, she said.

“We’ve had lots of phone calls and emails [asking about the event],” Ahern said.

Art and writing are undeniably connected, Ahern said. Writing is a form of art, she said, and it takes artistic talent to write a book as well as illustrating one if necessary.

Nieto demonstrated the basics concepts needed to create the face of a character in the specific style of art. Using a CD to create a perfect circle, he explained that it served as the base for the head of the character.

“The idea of this program is that we’re going to learn how to create these patterns that we can use as we continue drawing,” Nieto said. “Circle and axis, that’s how we start any character.”

As Nieto demonstrated the importance of having a solid head base, he drew well-known anime characters whose features corresponded to those he explained. The participants would shout out the names of the characters they recognized — Ash, Naruto and Sailor Moon — some guessing the character before Nieto had even completed the drawing.

“Your brain is recording all the steps we are going through today, so next time it’ll go a lot faster,” Nieto said. “Self-correct as you’re drawing, and your drawings will be a lot better than other artists.”

Using a vertical line, Nieto showed his participants how to draw mouths symmetrically and asymmetrically without losing their key features. Nieto repeatedly said the mouth, eyes and eyebrows have the ability to portray many different emotions.

“Make choices in life that gear you towards art,” Nieto said. “As long as you’re making some type of creative choice, you’re an artist.”

As a self-taught artist, Nieto said he learned that drawing characters is nothing but geometry and lines. He said artists should not be expected to draw perfectly each time and marking the middle of the line is simply a guide that will help the drawing progress.

Nieto said he makes it a goal to reach as many young artists as he can. Partnering with public libraries and children’s hospitals are some of the ways he works to pursue his goal.

“You are the next generation of artists,” Nieto said. “You can train your brain on how to tell stories with pictures.”

Those participants who wanted to further showcase their artwork were invited by Nieto to upload their drawings to the website animeyourway.org. More tutorials and event plans are also available on the website.