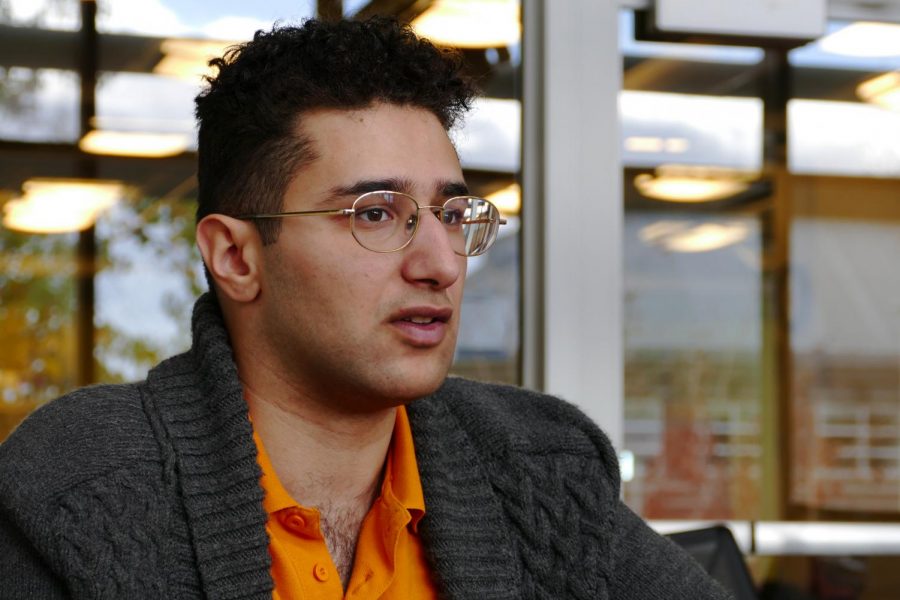 WSU College Republicans President Amir Rezamand discusses his reaction to Judge Brett Kavanaugh’s nomination to the Supreme Court. He said any allegations of sexual violence should be examined in a dignified manner.

Two student leaders with differing political views shared their thoughts and feelings on Judge Brett Kavanaugh’s nomination to the Supreme Court on Oct. 6, yet both agree political participation is important.

“When [Kavanaugh’s nomination] was first announced, I was not the biggest fan,” said Amir Rezamand, president of the College Republicans. “As the process continued, I saw the man’s character and his ability to thrive under fire. He simply grew stronger in it.”

Hannah Martian, vice president of the Young Democrats, did not agree with Rezamand’s sentiments. Martian said Kavanaugh’s nomination is yet another example of men being put in positions of power they do not deserve.

“I guess I’m just really disappointed,” Martian said. “Once again, women in this country are reminded that they don’t matter as much as men do.”

Rezamand said any allegations of sexual violence made should be examined and investigated in a dignified manner.

“I think allegations are being weaponized and I think they’ve always been weaponized,” Rezamand said. “[Sexual violence] is a very serious issue and it needs to be treated very seriously.”

In the wake of the sexual assault allegations, Rezamand said it was likely that left-wing politicians would attempt to use the situation to their advantage.

“[Investigations] need to happen in a very dignified manner for both parties involved,” Rezamand said.

Martian said the negative treatment of women is another form of victim-blaming and nearly every woman she knows has a story in regard to being a victim of sexual violence.

Suppression is common for women, she said, as it is not seen as socially acceptable, polite or respectful to come forward with allegations of such events.

“This is not something women are out here lying about just so they can get attention,” Martian said. “These stories are personal and they are deeply traumatic.”

Rezamand said investigations should be analytical, allowing for the evidence to speak for itself. He also said the court of public opinion should not be allowed to intervene in such dire procedures.

“We in Western society have decided over a long period of time that it is much, much worse to convict an innocent person than to not convict a guilty person,” he said. “Whether that’s true in practice or not, that’s another thing.”

Martian said sexual assault allegations are rarely reported because of the bias women receive from the public.

“Our society is moving towards a place where we are more open to holding men accountable for their actions,” she said. “We’re coming to a point where we just have to say something.”

Despite their differing opinions, Martian and Rezamand both encourage WSU students to be politically active.

“Our organization is issue-based advocacy. Voter registration is awesome, but it’s not our main objective,” Rezamand said. “Our main focus has always been on pushing issues and expanding knowledge from our right-wing perspective.”

Martian said the voting initiative is a double-waved process. The first is registering people to vote. The second is getting them to then vote.

“There are so many groups on campus focusing their energies towards voting and I think it’s going to be really successful,” she said. “It’s so important that everybody votes because it’s our lives on the line.”