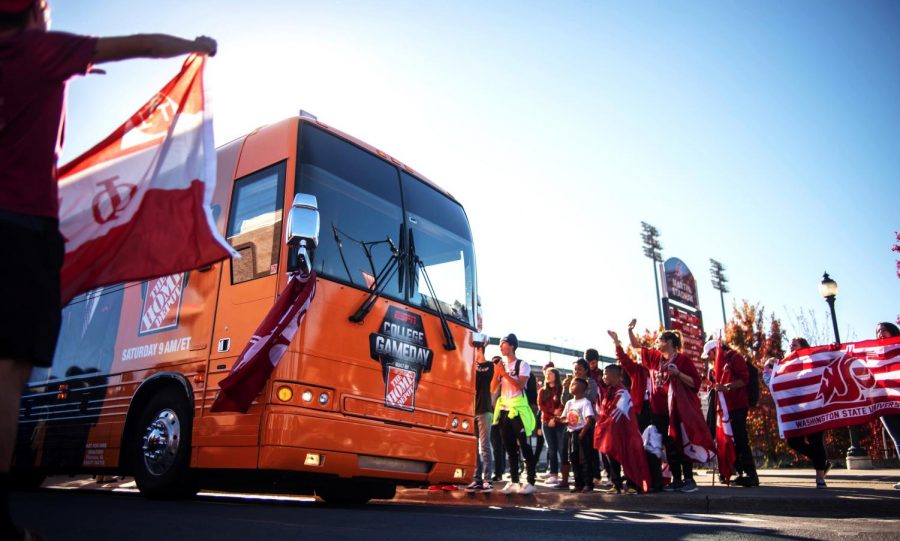 The fans lined up on both sides of the street with the band and cheer squad playing music and chanting the WSU theme song with Butch T. Cougar keeping the excitement up for the buses’ arrival. Go Cougs chants played tag back and forth with everyone on either side of the street.

These cheers and dances were definitely thrilling and this was only the prequel to the GameDay show. The long-running show has been viewed by many students here on campus who are looking forward to seeing it held at WSU.

“I grew up watching College GameDay with my dad every single Saturday morning,” WSU senior Joseph Goguen said. “So it’s exciting that I get to experience that.”

Originally the bus was scheduled to arrive on campus around noon to 12:45 p.m., but that wasn’t the case. Though the crowd shouted out times when the bus was supposedly arriving, the ESPN crew didn’t actually arrive until around 2:30 p.m. By then traffic was slowly stopped as the crowd grew with zealous fans pouring out into the streets.

As the bus arrived, fans were directed to step aside until it came to a complete stop. Once it did, it was like throwing a piece of meat into a piranha tank. Everyone huddled to the bus, chanting and cheering and pulling out their phones to record the first College GameDay visit to Pullman.

“[Our campus is] going to shine in all of its beauty and glory and the world is going to get to see it, so this is going to be a wonderful day for WSU,” Director of Athletics Pat Chun said. “Yet another historic day in our long and storied history. It’s going to be awesome.”

With all of the excitement from ESPN’s arrival, there has also been some concern.

It’s estimated that the population of Pullman, which is around 33,000, may possibly take on crowds of up to 75,000. Though the number is uncertain.

This prompted the Pullman City Council to issue a state of emergency and Pullman Transit opened its availability to provide assistance for crowd travel.

College GameDay’s broadcast starts at 6 a.m. Saturday near Martin Stadium and the Cougar Pride Statue. Fans are planning all-nighters to get a chance to be on television next to the GameDay desk with their own custom-made signs.

“There’s a reason why Cougs call this place home and we understand that this is everyone’s home,” Chun said. “Our hope is all of our Cougs treat our guests in our home extremely well, understand this is an epic day in our history, that this is the type of exposure that’s going to resonate for years to come at Washington State.”