No. 22 Cougars take on Sun Devils 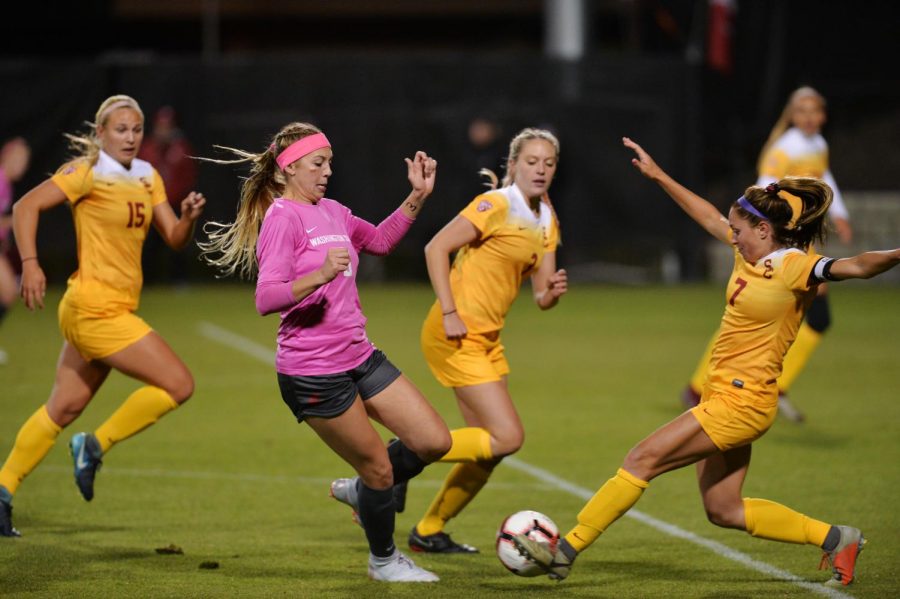 No. 22 WSU soccer will travel to Tempe, Arizona, to face Arizona State University on Thursday. The Cougars will be searching for a victory as they have lost the past three games in conference play.

The last time WSU was on the road was two weeks ago when it traveled to both Colorado and Utah. The Cougars picked up their first two losses of the season on this road trip, leading to a hard weekend coming home as their next matchup was against No. 2 University of Southern California.

WSU was looking to upset USC when the teams faced off in Pullman last weekend but ended up falling just short of the victory by a score of 3-2. In this game, the Cougars played evenly with the Trojans; however, in the end it came down to one extra goal that caused the loss for the team.

After this loss, junior forward Morgan Weaver felt there were many things the team could improve on before facing their next competition.

“I think execution and being able to finish those simple goals, you know, sometimes we make the hard ones and not the easy ones,” Weaver said. “I think that is our biggest thing right now and I think being able to work on that as a team will show in the games.”

In the past four matchups against Arizona State, the Cougars have won the past three years and tied once in 2014. The Sun Devils have a 6-5-1 record for the season and recently tied with the University of Colorado 1-1 in double overtime.

Over halfway through Pac-12 Conference play, the Cougars hope to climb their way out of this slump and get back on a winning streak. Senior defender Maddy Haro said the team’s mentality has to be different going into Arizona this weekend.

“Our mentality has to be completely different, we cannot let off the gas at all,” Haro said. “There’s a couple of things that you just can’t coach and that’s hard work, passion and determination, and if we bring our full effort then we can’t be touched.”

With five more teams coming in conference play, WSU will need to go into the road games over the weekend with a change in focus. The Cougars will face a challenge in these upcoming games, especially when they play No. 1 Stanford University on Oct. 28.

The Cougars know the losing streak they are currently stuck with will vanish at some point. However, they must put in the work and gain a victory to change this. Head Coach Todd Shulenberger is determined that his team will break the losing streak soon.

“One of these times we are going to get the next one, so I would hate to be the next opponent because we’re looking forward to it,” Shulenberger said.