College GameDay will make appearance in Pullman for first time ever as No. 25 WSU hosts No. 12 Oregon 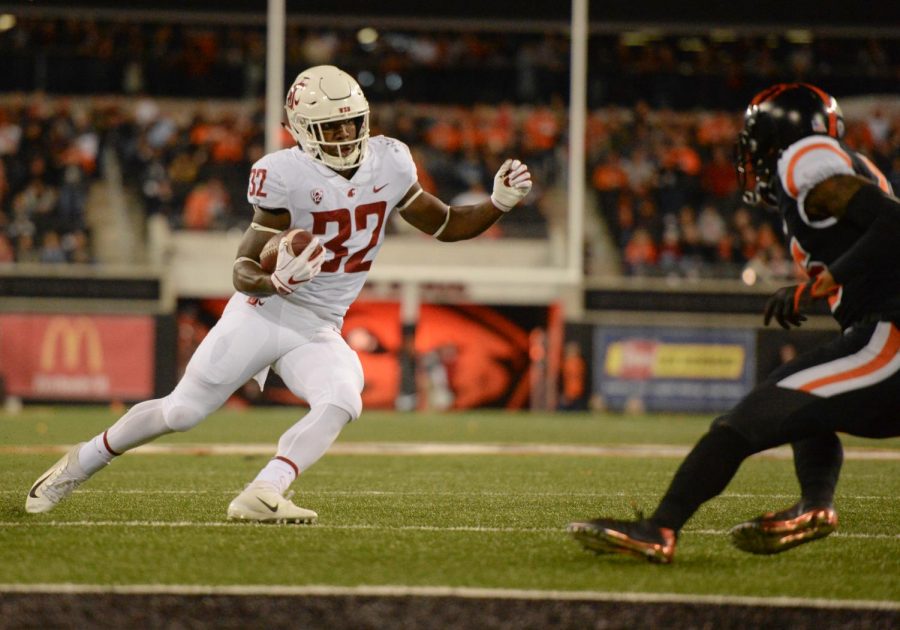 Redshirt junior running back James Williams jukes the Oregon State University defense to run the ball into the end zone Oct. 6 at Reser Stadium. Williams has eight total touchdowns and leads the team with 267 rushing yards.

When the spotlights come on and the red carpet is rolled out, that usually means something great is being shown to the world. This weekend’s premiere features the city of Pullman and the WSU football team as ESPN’s College Gameday and University of Oregon come to town.

Saturday’s events will start at 6 a.m. with College GameDay broadcasting from Pullman in preparation for a pivotal Pac-12 matchup between No. 25 WSU and No. 12 Oregon. The winner of this matchup will be sitting in the driver’s seat for the Pac-12 North.

WSU Head Coach Mike Leach shared his thoughts about GameDay coming to the Pullman for the first time.

“I think it is a really good opportunity for our fans and a good showcase for our university and team,” Leach said.

One thing he and his team are prepared for is the challenge that awaits them Saturday evening at Martin Stadium.

“We’ve always been ready and excited to play [Oregon],” Leach said. “All of our games are really hard-fought against them and I think this one will be the same … They have a lot fast guys and they move quickly, and it usually comes down to who is willing to slug it out more at the end.”

The Cougs, currently 5-1 overall, 2-1 in conference play, have a big test as they go up against the high-flying Oregon football team. The Ducks come into this matchup with the same overall and conference record as WSU, but they have already faced quite a bit of adversity this season.

They are coming off their biggest win of the season last weekend as they defeated then-No.7 University of Washington at home at Autzen Stadium in Eugene, Oregon. The game went back and forth, and it looked as if the Huskies would win on a last-second field goal; however, UW missed the field goal, and the Ducks took the advantage in overtime.

Despite their impressive win last weekend, the Ducks were on the wrong end of a blown lead against then-No. 7 Stanford at home. Oregon got off to a fast start and was dominating the game 23-7 in the third quarter, looking to be headed to an easy victory.

However, the Ducks made costly mistakes in the third and fourth quarters that helped Stanford come back to win in overtime. College GameDay was also in attendance for this Pac-12 matchup.

The Cougs, on the other hand, are looking for a different result when they host College GameDay on Saturday. The WSU Air Raid offense is led by graduate transfer quarterback Gardner Minshew II, who leads the nation in total passing yards and average passing yards per game.

Minshew is helped by senior running back James Williams, who leads all running backs with 32 receptions, redshirt junior wide receiver Easop Winston and sophomore wide receiver Tay Martin. Minshew will need to rely on his favorite targets if he wants to move the ball on offense against an athletic Oregon defense.

However, his counterpart for the Ducks, junior quarterback Justin Herbert, is having a season just as impressive as Minshew’s. Herbert, projected to be a top pick in this upcoming NFL draft, has an elite arm and impressive mobility in the pocket for a 6-foot-6-inch quarterback. These qualities are why many NFL scouts see him as the best at his position in all of college football.

“I think he does a good job of leading their unit,” Leach said. “He can run a little bit. He’s more effective throwing it though, but they are a running team that has good balance on offense.”

The Coug defense knows it will have to keep Herbert, Verdell and Mitchell in check if WSU wants to pull off the upset victory.

The Ducks hold the advantage in the all-time series with a 47-41-7 record against WSU. Despite the record, the Cougs have had recent success against Oregon with wins in the last three matchups. A win on Saturday would give WSU four-straight wins over the Ducks for the first time since 1981-84.

This will be the second time the Cougs play at the site of College GameDay, with the first one on the road in 2002 against then-No.6 Ohio State University which resulted in a 25-7 loss for WSU.

Leach believes the fans’ excitement will make a great impression on College GameDay.

“The environment at our place is of course outstanding and has been for a long time,” Leach said. “I do think [College GameDay will] be back again. I think everybody this first time out is definitely excited about it and has looked forward to it.”

History will be written at 4:30 p.m. Saturday in Martin Stadium as the city of Pullman and the Cougs look to put on the best show College GameDay has ever seen.