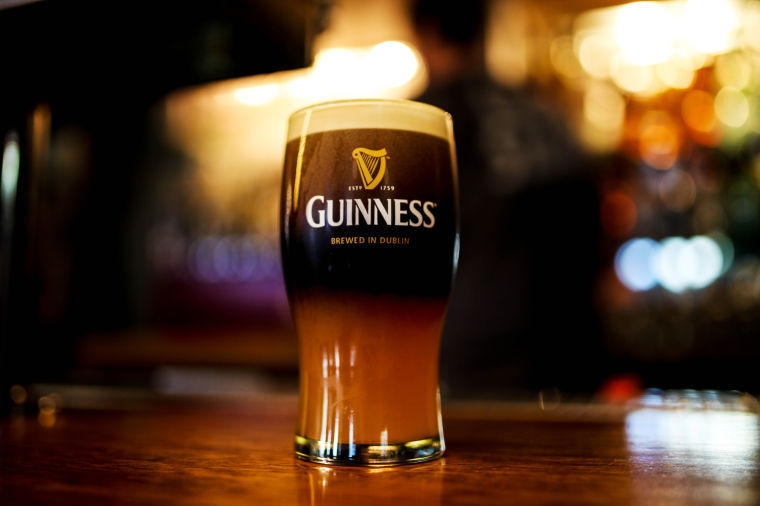 A Guiness and Blue Moon mixture is poured into a glass at The Cougar Cottage, Monday, March 10.

The best rainbows don’t lead to a pot of grubby, inedible gold. They end with a pot full of corned beef.

Even though it’s not historically Irish, this delicious, salt-cured beef dish is a traditional meal for St. Patrick’s Day.

Although there was a large amount of cattle raised in Ireland, beef was too pricey for most Irish to eat. However, when the Irish immigrated to America in the 19th century, they found much cheaper beef prices and developed corned beef as an Irish-American tradition.

Irish-Americans would buy the cheaper, tougher cuts of beef and cook them slowly over several hours. This resulted in a soft piece of meat that fell apart in small slices. Today, a slow cooker is an ideal method to achieve a complete corned beef meal.

In order to start making your own recipe, purchase one at your local grocer.

Most stores will have sales on corned beef around St. Patrick’s Day, so keep your eyes peeled for a competitive price. Don’t buy a piece much larger than your slow-cooker can hold. The meat will shrink over the cooking period, but you want to leave enough room for potatoes and carrots.

Corned beef is stupidly easy to make with a slow cooker. Just open the package, put the meat in the cooker, cover with a lid, and begin to cook on low for about eight hours. If your cooker has a higher temperature setting, you can use it to shorten the time. However, the best corned beef texture is achieved with the slow setting.

The vegetables don’t take as long to cook as the meat, so put them in during the last half hour of cooking. When the vegetables are as soft as you want them to be and the meat is a dark pink color, it’s time for the over-21 crowd to pour a dark cold beer.

Guinness is probably the most popular Irish beer, and its dark, foggy flavor goes well with the salty beef and steamy vegetables. However, it is a bit of sham, as some of the Guinness sold in America is brewed in Canada, not Ireland. Washington State alternatives include the Quilter’s Irish Death from Iron Horse Brewery or the Postal Porter from Paradise Creek.

To really appreciate the bold flavors and textures of corned beef, try pairing it with some Irish film.

There are several fine movies set in Ireland’s storied past that will entertain and explain why those first generations of Irish-Americans clung so strongly to the culture of their parents.

For a brutal yet beautiful look at the political turmoil of Ireland in the early 20th century, look for “The Wind That Shakes the Barley.” “Perrier’s Bounty” is a modern gangster comedy with a wit as dark as your beer and “Waking Ned Devine” is an irresistible small town comedy about enjoying life to the last drop.

However you choose to celebrate St. Patrick’s Day, may you have warm words on a cold evening, a full moon on a dark night, and the road be ever downhill all the way to your door.