Cougars take down No. 12 Oregon as students rush field 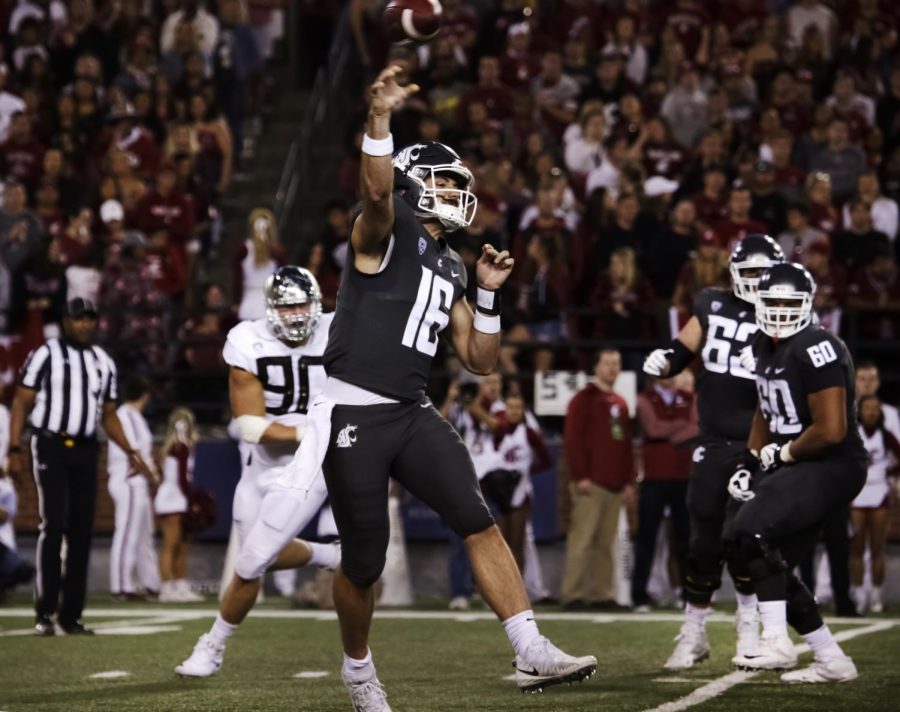 Graduate transfer quarterback Garner Minshew II passes the ball down field during the WSU versus University of Oregon game Saturday at Martin Stadium.

There are certain days that are so eventful they will be remembered forever. That is how Saturday will go down in Pullman history as ESPN’s College GameDay came to town for the first time ever and then-No. 25 WSU took down then-No. 12 University of Oregon 34-20 in front of a sold out crowd.

Minshew said the Cougars were looking to get out to a quick start and catch the Ducks off guard which they did by jumping out to a 27-0 halftime lead over Oregon.

“There was so much energy in town and we knew we needed to bottle it up and play really well,” he said.

The Cougs drove down the field to start the game, getting all the way to the red zone before turning the ball over on an interception. Despite that, WSU took the lead on its second drive as redshirt junior running back James Williams had a 24-yard run where he broke eight tackles before getting in the end zone.

WSU extended its lead at the beginning of the second quarter when Minshew threw a 16-yard touchdown pass to redshirt sophomore receiver Renard Bell to put the Cougars up 13-0 after redshirt freshman kicker Blake Mazza missed an extra point.

The Cougars continued their dominance of the first half by shutting down a powerful Oregon offense led by their highly-touted junior quarterback Justin Herbert, a projected top NFL draft pick.

The WSU defense helped get the ball back to the offense late in the first half, leading to an 8-yard touchdown from Minshew to redshirt junior wide receiver Easop Winston and putting the Cougars up by 20.

The Cougars were not done scoring in the first half. After a quick offensive drive for Oregon’s offense, the Cougs scored another touchdown on a 15-yard catch by freshman running back Max Borghi, putting WSU up 27-0 at halftime.

The first half could not have gone much better for the Cougs. Unfortunately, the game was a tale of two halves for WSU with the majority of the second half featuring a struggling Cougar offense and defense.

Oregon opened up the second half on offense and looked more like the offense everyone had grown accustomed to from the Ducks. The first drive of the second half was one in which Oregon easily drove down the field, culminated by a Herbert 8-yard run.

The Ducks cut the lead to 27-7 and then 27-10 after a 32-yard field goal from Oregon sophomore kicker Adam Stack. The Cougars’ offense had lost its offensive momentum in the third quarter, with Minshew throwing for only 18 yards.

Oregon, on the other hand, had regained its magic touch and was able to claw its way back into the game on an 11-yard touchdown pass from Herbert to sophomore wide receiver Jaylon Redd to make it 27-17.

The Cougars able to escape the third quarter while still in the lead, but it was obvious they would need to add more points if they were going to win a critical Pac-12 Conference game.

This was even more evident when Oregon got another field goal from Stack to make it a 27-20 game, putting the Ducks down by a touchdown after facing a 27-0 deficit.

Despite their lack of success in the second half on offense, the Cougars knew they needed to score once more to keep the Ducks from beating them.

The final drive for WSU was significant to the Cougs’ win. Minshew threw a pass to redshirt freshman wide receiver Travell Harris; however, the Oregon defender was covering Harris closely and the ball looked destined to be intercepted. Harris made sure that would not happen by ripping the ball from the defender’s hands to make a 36-yard catch.

“It was an outstanding play,” Head Coach Mike Leach said. “[Harris] was 2 feet shorter than the defender and he still ripped it away. He is a very competitive and strong guy.”

That was just the momentum shift the Cougars needed and a few plays later Minshew found junior wide receiver Dezmon Patmon open in the back of the end zone for a 22-yard touchdown with 3:40 left in regulation. The Cougs were then up 34-20.

That would be all the scoring in the game as the Cougs pulled off the victory over Oregon. When the game clock showed all zeros and a Coug win was on the scoreboard, the WSU students stormed the field to cap a day that will be remembered in Pullman forever.

WSU is now second in the Pac-12 North right behind University of Washington and the team is bowl-eligible for the fourth consecutive season with a 6-1 record.

After the upset, Minshew shared more about his choice in coming to Pullman and his feelings about the team.

“After the game I just started to think that I made the right choice in coming here,” Minshew said. “I love it here and I love the guys on this team. I’d do anything for them and they’d do anything for me. I’m just proud to be a Coug right now.”

WSU will take on Stanford University at 4 p.m. Saturday in California. The game can also be seen live on Pac-12 Networks.