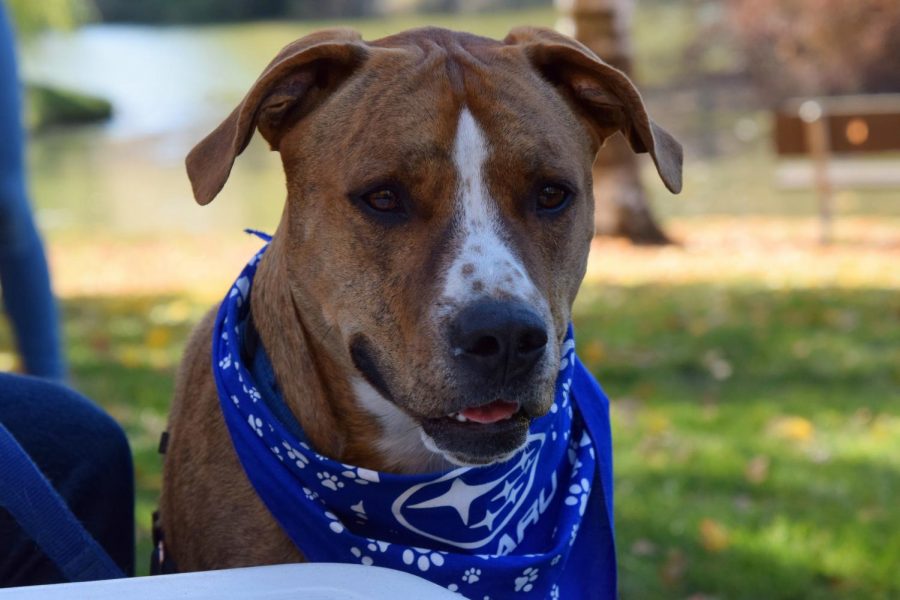 Clay, a 1-year-old pitbull and labrador mix, enjoys dog-friendly festivities at the Pets and Petrol event Saturday at Sunnyside Park.

Pullman was treated to a sunny sky as the Automotive Enthusiast Club (AEC) held its first Pets and Petrol event at noon Saturday in Sunnyside Park to raise money for the Whitman County Humane Society and Humane Society of the Palouse.

Katie Iverson, AEC event manager, said she got inspired to put on this event after seeing a Subaru commercial on Facebook.

“We have a lot of members who bring their dogs to our events anyways,” Iverson said. “I also have a friend who is the manager of the Pullman humane society. She’s talked to me about what the shelter needs and what it’s like working there, and I thought it would be nice to raise donations.”

The event was a few hours before WSU football kicked off against University of Oregon. Iverson said she wanted to plan her event on a football weekend to give people something to do beforehand but was nervous people would be too drawn to the festivities to check out the event.

“It just so happened it was the same day that College GameDay happened,” Iverson said. “We were worried we wouldn’t get many people, but I am happy with the turnout. Especially since this is the first time we’re doing an event like this.”

Iverson said she lucked out with the mid-60-degree weather. The club had set up a table where visitors would donate to the humane society while enjoying cookies and cupcakes.

In total, there were over a dozen people in attendance and many chose to contribute to the humane societies of Pullman and Moscow. While others were out tailgating, the AEC members came to support each other, including members from the University of Idaho AEC chapter.

President Reilly Neel started his own Automotive Enthusiast Club nine months ago with the help of his friend Derek Peters, who serves as the club’s event coordinator.

Neel said he had to be cautious working with a group as large as WSU’s AEC when they were first starting out. With enough time passing to establish themselves, he said he thinks the collaboration between the two schools has been positive for both.

While neither Peters nor Neel own dogs themselves, they felt it was important to make the drive to Pullman to support the event.

Peters said AEC connects people in a unique way and that everyone can find a place in the organization no matter who they are.

“People argue over a lot of stuff, but with cars people seem to come together,” Peters said. “Even if I have a giant Dodge truck, I respect people driving Honda Civics.”

After three hours, the AEC packed up its donation table and members walked their dogs back to their cars.

“A lot of the money that helps fund our student organizations come from the community at some point,” Iverson said. “It’s good to give back to your community. That’s a skill that’s useful, whether you’re in school or not.”