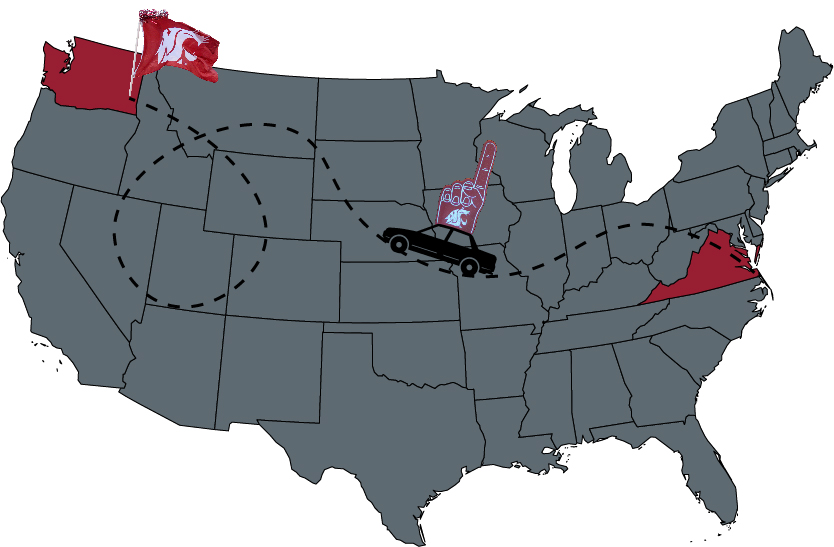 Travis Crawford traveled 2,721 miles to reach Pullman and enjoy ESPN College GameDay. He drove for four days from Virginia Beach, Virginia, and only stopped in Pennsylvania, Minnesota and Montana.

Coug fans all around the nation waited more than 15 years to get the opportunity to have College GameDay come to Pullman. When the news broke that ESPN would be making its appearance, nearly every Coug fan was ecstatic, especially WSU alum Travis Crawford.

Crawford grew up in Whidbey Island, Washington, and was a Navy brat as his father served for 22 years. In fall 2004, he decided to enroll at WSU and major in mechanical engineering.

After a couple of years of struggling through school, Crawford decided to switch courses and found history to be the right major for him. At this point, he was put in an academic hole he had to dig himself out of as he struggled with school, finances and issues within his family.

However, through it all, there was one thing that served as his getaway from life and that was Cougar football.

“My five years here were hard but they were fun,” Crawford said, “and Wazzu football, even though in 2004 that was the beginning of their downturn, was kind of my refuge from all of that extra noise.”

As Crawford continued through college, he did not miss a single home game from 2004-10 and traveled to each Apple Cup that was in Seattle. He was a die-hard Coug fan and found that WSU football was more than just a game.

Crawford’s first job after college was at Dave Smith Motors as a car salesman. He stayed at this job for half a year until he started to consider going into the military due to the economy in 2010.

In April 2013, Crawford enlisted in the U.S. Navy. He was in the military for five and a half years and is currently living in Virginia Beach, Virginia.

When College GameDay announced it was coming to Pullman, Crawford’s friend from WSU, Jeffrey Mohn, told Crawford the news in hopes he would come back for the big day.

“I got a message from Mohn that said ‘Get your stuff and get out here’ and it had the tweet with Kirk Herbstreit saying ‘Pullman, we’re coming your way,’ ” Crawford said.

With that, Crawford made the decision to make the 2,721-mile trip from Virginia Beach to Washington to attend the first College GameDay that Pullman has ever seen. On Monday, he started his journey back to Pullman across the country.

Like many Cougs, Crawford has a strong love and passion for Pullman and WSU. He believes his struggles throughout his college career helped build him as a person and have helped him in his military experience.

“Coming back here, it’s coming home,” Crawford said. “Plenty of people say that this is home for them but I really do mean it. When I told people I was going home, I wasn’t talking about Whidbey Island.”

This was Crawford’s first time walking on campus in four years as he had been busy serving in the Navy. He said being on campus again was like seeing it for the first time and the distance away from Pullman made him appreciate his home more than ever.

Crawford had been to one other College GameDay in Atlanta and saw the passion and spirit from schools in the South. After seeing their pride, he believes nothing compares to the pride and passion WSU fans share.

Being a die-hard Coug fan, Crawford was excited College GameDay was coming so it could showcase WSU and Pullman for the rest of the country to see. Knowing Saturday would be a day for the history books at WSU, Crawford said he wouldn’t miss it for the world.

“It just feels like it all came together because I’m where I’m supposed to be,” Crawford said, “and after all these years of my screaming and yelling and telling people they are wrong about our program, we get to be the center of the college universe for a day and I get to be right in the thick of it and that is awesome.”