Some locations maxed out, away from campus patronage less affected 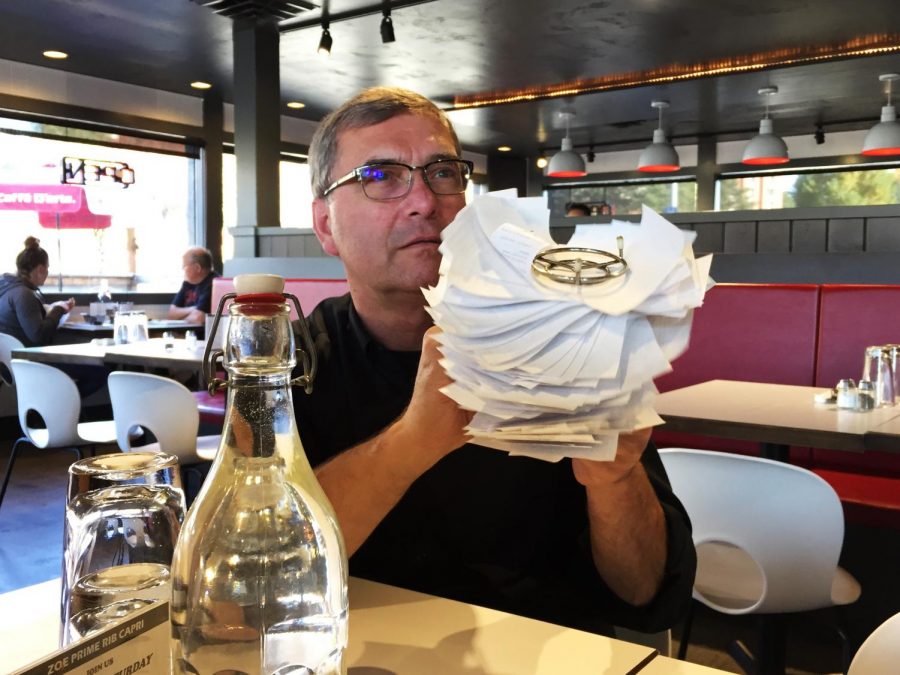 Mike Wagoner, owner of Zoe Coffee and Kitchen, shows a visual representation of the amount of credit card receipts they accumulated on a spike stick this weekend with ESPN’s College GameDay in town.

While many students were out late in celebration of ESPN’s College GameDay coming to campus over the weekend, downtown business owners braced themselves for one of Pullman’s biggest football weekends yet.

Kristy Mosman, Zoe Coffee and Kitchen manager, said it was hard to gauge the capacity of GameDay and the number of people in town. The restaurant started getting busy after the game and customers had to wait 45 minutes to an hour at one point.

Mike Wagoner, Zoe Coffee and Kitchen owner, said they also had to cater to members of the marching band and ESPN. Mosman said they prepared items such as salads and salad dressing the night before.

“I got two hours of sleep that night,” Wagoner said.

Shelby Molinar, Thomas Hammer Coffee Roasters manager, said Saturday was an average business day for them although they had expected it to be busier than usual.

“Once 2 o’clock hit, we died completely down,” Molinar said.

The lull during that time gave the staff a chance to regroup and clean up, she said. They did food preparations ahead of time and made sure there were enough staff members for the weekend.

“When College GameDay [was] announced,” Molinar said, “I was kind of freaking out.”

She said the coffee shop opened at 5 a.m. Saturday even though it normally opens at 7 a.m. They did not get as many customers as expected, but they still wanted to make sure people had an option to get coffee.

Molinar said two of the most frequent orders they received were breakfast burritos and drip coffee.

Tommy Krahn, Porch Light Pizza manager, said they were able to keep up with their orders because the restaurant was not as busy as they expected.

“[On Saturday], our sales total was less than an average Saturday usually would be,” Krahn said.

Residents and visitors in Pullman were in “GameDay mode,” which might have affected the atmosphere of the restaurant, he said.

“I was out and about [Saturday] and we were expecting a little bit of a pop after the game,” Krahn said. “When I walked by the stadium, every single bar up there had lines out the door and around the corner.”

Kevin Carosella, Sella’s Calzone & Pizza owner, said the amount of customers they had was as big as a typical football game.

“I don’t think the GameDay had a whole lot of effect on us,” Carosella said.

The Coug, one of the calzones they serve, was one of the popular items that night. They also sold a lot more salads than they normally do.

“A lot of people … want to show their pride, so they order the Coug just because,” Carosella said.