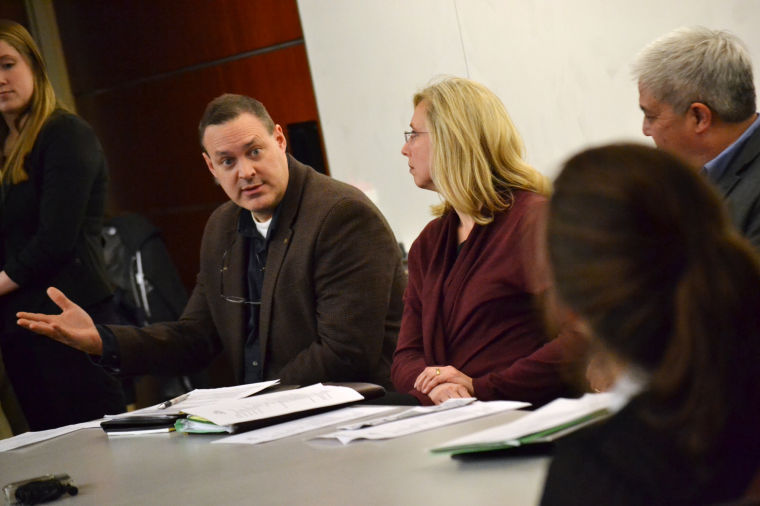 WSU students, faculty and staff showed mixed feelings Thursday night on a bill that would outlaw all forms of tobacco use on the Pullman campus.

Freedom of choice was a popular talking point at the public forum in the CUE, where the bill received both praise and criticism.

Roger Patterson, the vice president of WSU Finance and Administration, said while administrators have no immediate plan for a tobacco-free campus, the policy change is likely inevitable.

“The change is going to happen at some point,” Patterson said, explaining that policies on the issue continue to evolve.

He said when he was in college, students were permitted to smoke in the hallways of buildings on campus.

WSU currently observes a state law that requires smokers remain at least 25 feet from the nearest building entrance. WSU Police Chief Bill Gardner addressed concerns that the law is not adequately enforced. Complainants speculated a ban on tobacco use would achieve similar results.

“I think something to keep in mind is that we live in the real world, and laws don’t always get enforced consistently,” Gardner said. “We have to be reasonable in how we apply the law.”

Dan Maher, ASWSU adviser, said he empathizes with non-smokers and distances himself from crowds to enjoy his pipe. Nonetheless he disagreed with the premise of the bill, lamenting that Washington law prohibits him from smoking in bars.

“And you can have designated smoking areas,” he said. “You can put them out by the bears, for crying out loud. The real crux of the matter is that they took away my choice.”

Bruce Wright, the executive director of Health and Wellness Services, addressed several of the health concerns that come with smoking.

“There’s no level of exposure to passive smoking that you could say doesn’t pose a health risk,” Wright said. “If a student is, for example, walking through an entrance, and every day they’re going through that, then sure, it’s a health risk.”

Dakota Renz, a freshman delegate for the ASWSU Senate and a sponsor of the bill, stressed the importance of the voting process and encouraged students to provide feedback on the issue.

“ASWSU will not make a stance on this until the completion of the ballot and the votes have been tallied,” Renz said. “If voted yes, this is an entire campus culture change.”

ASWSU Sen. Avery Maxwell, who also sponsors the bill, explained why she and Renz have taken an “all or nothing” approach, foregoing the idea of designated smoking areas for the goal of a tobacco-free campus.

Early in the planning stage, sponsors considered smoking areas that resemble bus stops, with partial enclosures that would help prevent tobacco smoke from polluting outside air.

“One of the things we looked at when we first looked into this was the cost of those areas and the upkeep of those areas,” Maxwell said, explaining that the outright ban seemed more viable as they continued to research.

Others questioned the placement of ash receptacles outside the Terrell Library, which they argued attract a large number of smokers to the area.

Dwight Hagihara, the executive director of WSU Environmental Health and Safety, explained that the receptacles are strategically placed to minimize litter and, consequently, the amount of toxins that reach groundwater drains.

ASWSU Sen. Samantha Kieling argued against the bill, suggesting a ban on tobacco use might negatively affect smokers’ studying habits. Kieling said some students might be discouraged from using the library if they can’t take regular smoke breaks.

If the bill is passed, ASWSU will assemble a task force comprised of students and university administrators to determine how best to enforce the policy.

“Generally there’s a high level of compliance here at WSU,” Gardner said. “And I think that’s something we would rely on if this were to get passed.”

The ASWSU presidential election will take place March 11 and 12, and this issue will be on the ballot.