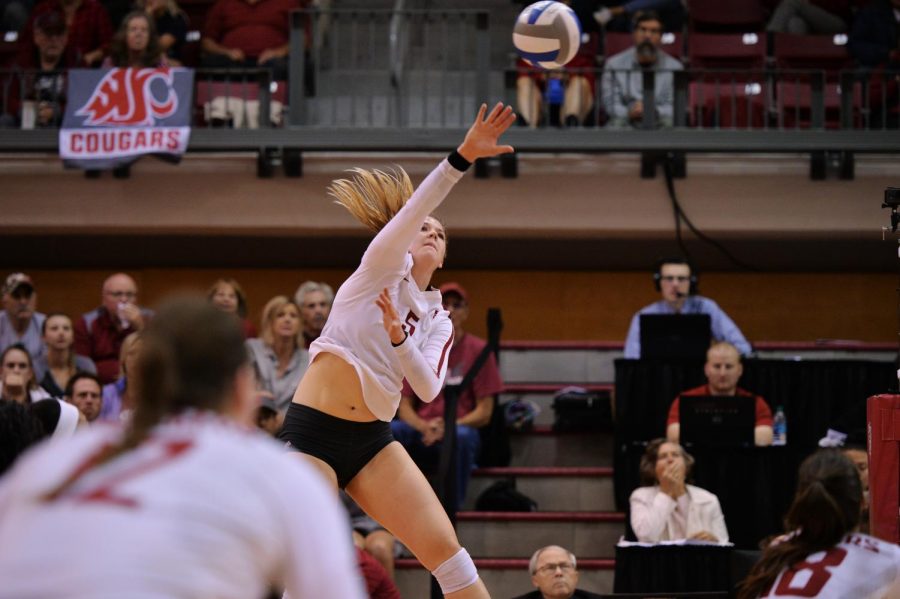 Senior outside hitter McKenna Woodford strikes the ball over the net to the University of California, Los Angeles, on Sunday in Bohler Gym.

No. 23 WSU women’s volleyball got its second win of the perfect weekend against No. 20 University of California, Los Angeles, on Sunday.

Head Coach Jen Greeny said she was really proud of the way her team came out to play against a really good UCLA team.

“This is probably the best weekend in WSU Athletics history,” Greeny said.

Set two started out with the same intensity from the Cougs. A 9-3 early lead was enough to hold off the Bruins for the rest of the set.

UCLA made some attempts at coming back, but they were not enough. A kill by sophomore outside hitter Penny Tusa and a block by junior setter Ashley Brown kept the momentum in the Cougs’ favor throughout the middle of the match.

Redshirt junior middle blocker Jocelyn Urias helped finish off the Bruins with her nine kills and three blocks through the first two sets. WSU won the second set by a score of 25-20.

Greeny said they had to adjust to what the Bruins were showing them, but Brown did a great job of getting the ball to Urias.

With the end in sight for the Cougs, set three started out close. A 6-4 early lead for WSU was erased as UCLA came back and took the lead 12-10.

The Bruins kept stayed ahead until senior outside hitter McKenna Woodford had a huge kill to put WSU ahead 19-18.

The Cougars never looked back from this lead and won the set 25-21, winning the match three sets to none.

Urias finished the match with a career-high hitting percentage of .700 and added 14 kills for WSU. After suffering two losses in the previous weekend, the home sweep was just what the team needed and hope to continue into next week.

“This was a great weekend for Cougar Nation,” Greeny said.

The Cougars will travel to Salt Lake City, Utah, to face University of Utah at 6 p.m. Wednesday in the Jon M. Huntsman Center.