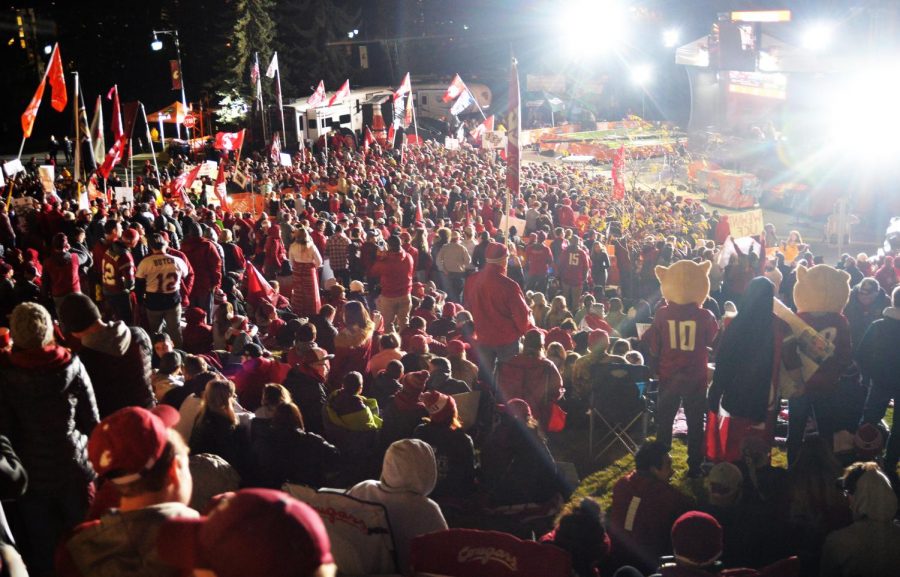 Cougar fans pile in and wait for ESPN's College GameDay to start Saturday by Martin Stadium. Pullman and WSU police reported more alcohol-related incidents than usual, but nothing overly extreme.

The Pullman Police Department responded to about 180 calls between Friday and Sunday morning, including multiple furniture fires in celebration after Cougar football beat University of Oregon on Saturday in Martin Stadium.

Pullman saw an influx of people as College GameDay set up shop for its show on campus Saturday morning, with ESPN tweeting that it estimated about 100,000 people were in the city for the weekend.

Pullman PD Cmdr. Chris Tennant said the city showed its best side as the national media focused its attention on the game.

“I think Pullman in general put its best foot forward under the national spotlight,” Tennant said. “It was good.”

Officers responded to six incidents of furniture fires on College Hill, with another that had not yet been lit when officers arrived, Tennant said. Of those fires, one was cardboard that had been lit on top of a television and two others were mattresses.

Tennant said Pullman PD responded to 181 calls for service, up from a typical WSU game day weekend that sees an average of 130 to 135 calls. However, he said the increase in activity was not an indicator of bad behavior by those visiting town for the game as a whole.

“Yes, we did have an increase in activity,” he said. “Considering how many people were in town and how big of game it was and that we had two major events, most of what we dealt with were misdemeanor-level incidents after bad decisions following lots of alcohol.”

Hansen said his officers dealt with a few more alcohol-related issues than normal, but said the “numbers weren’t astronomical.”

He also said the biggest issue WSU PD faced was managing its officers while having to cover a large number of hours, as the department helped provide security during College GameDay. In addition to the nine WSU officers on-site, he said 20 members of the Spokane Police Department and three Whitman County Sheriff’s officers provided help for the event.

Tennant said the mass of people in attendance at GameDay behaved well.

“We plan for the worst, hope for the best,” he said. “GameDay itself was a very positive, festive attitude. We didn’t have to take much enforcement action.”

While Pullman also saw heavy traffic at times over the weekend, both Tennant and Hansen said there wasn’t a significant increase in collisions. Tennant said Pullman PD dealt with a few more hit-and-run calls than normal.

Tennant also said there was no increase in driving under the influence citations. Although he said this was likely due to the fact officers didn’t have time to make contact with drivers.

Hansen said the main issue related to traffic was congestion.

“It took longer for people to get from one place to another,” he said. “I don’t remember a whole bunch of collisions or anything. I did get caught up in traffic a few times, even in the patrol car, but you had to anticipate that.”

Pullman officers also assisted ambulance crews on a number of detoxification calls, including people passed out in public areas after consuming too much alcohol, Tennant said.

Hansen asked the public to come forward if they have any information that could lead to the return of two helmets stolen from a photo booth on the College GameDay set Friday night. Police have identified the suspects as a male and a female who were seen running toward the RV lot next to Beasley Coliseum.