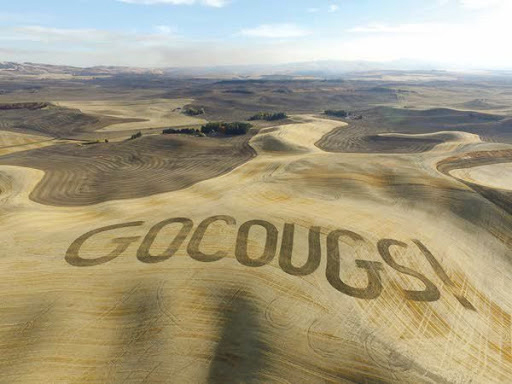 Brady Boone said an airport flight instructor was the first to see his etching.

A Pullman farmer and WSU alumnus plowed the phrase “Go Cougs!” on his family farmland for planes to see on Oct. 16.

Brady Boone drove his tractor to write the phrase while his father and two of his friends helped him gauge the height and the spacing between each letter.

Boone and his friends did not know if the “Go Cougs!” would turn out the way he wanted because they had to guess the right dimensions, he said.

“We didn’t know what it was going to look like until pictures of it showed up online,” Boone said. “It was nerve-wracking.”

The first person to notice the phrase was a flight instructor at the Pullman-Moscow Regional Airport, he said. Since then, many of the people flying in for the football game saw the etching.

Boone was able to complete the etching in approximately 30 minutes and the Boone family has decided to keep the message visible for a while so the people flying above it can view it and hopefully enjoy his work, he said.

“I’ve been thinking about doing this for years,” Boone said. “I thought this was the right time to do something like this.”

He has been farming on his family’s land with his father since 2005 but the Boone family has owned the farmland for about a century, he said.

The local farmer is used to planting wheat and harvesting crops every year and also has experience writing big messages in his fields.

He proposed to his wife through the same method of plowing her initials and “Marry me?” into one of the fields, he said.

Boone and his family have been fans of the Cougars for a long time, he said.

“Cougars have to work hard and I am happy to be a Coug,” Boone said. “WSU taught me how to do so many different things, that’s why I’m giving back.”