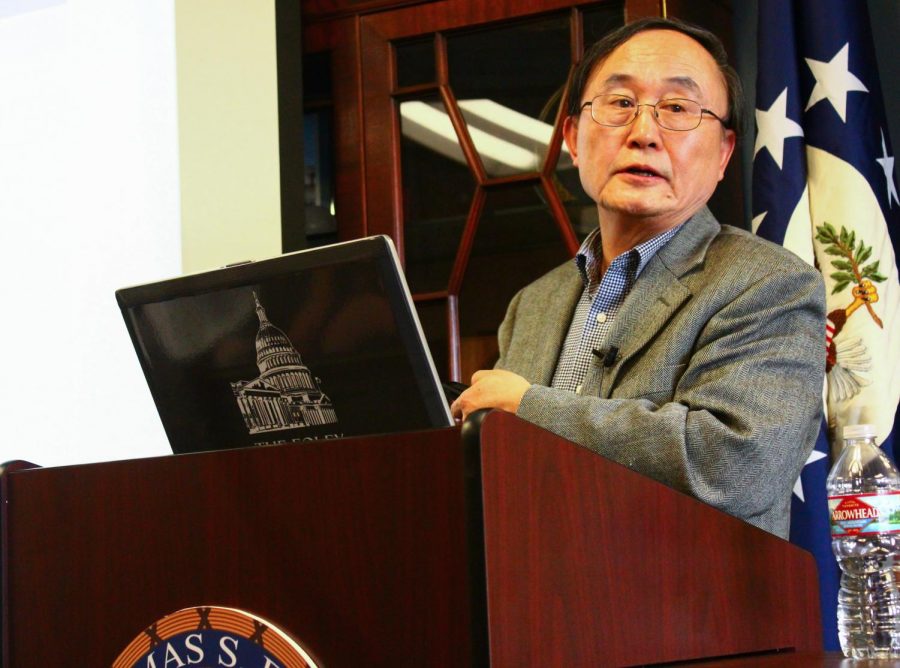 Yong-Chool Ha, Korea Foundation professor at University of Washington, spoke about the denuclearization of North Korea and the history of its nuclear program Tuesday afternoon in the Foley Speaker’s Room.

“North Korea was isolated and comparatively [to South Korea] suffering,” he said. “They had to find some means to protect themselves. That’s why they had to start nuclear programs.”

He said North Korea has a population about half that of South Korea, even though South Korea is much smaller than North Korea. North Korea also has a much lower gross domestic product.

He said in former President Barack Obama’s administration, there was not much done about denuclearization.

When Trump became president, Obama warned him about North Korea’s nuclear program and how that issue could intensify, he said. Recently, it became clear that North Korea could develop an intercontinental ballistic missile with a range of more than 5,500 kilometers, he said.

While this could potentially occur, Ha said it is a crazy idea politically for a missile from North Korea to reach Seattle.

“The North Korean nuclear program has not reached its completion but it’s threatening enough,” he said.

If this does occur, the U.S. may have to strike back, he said.

Ha said the joint declaration that was signed to change U.S. and North Korea relations on June 12 was an important moment.

“I think [Trump’s] approach to North Korea is quite new, quite different,” he said.

Ha thinks there are five perspectives in the U.S. people take based on the North Korea-U.S. summit.

The first one is moral fundamentalism, the belief that the leadership in North Korea has problems that are not going to change and Kim Jong Un’s leadership must be dissolved before change can happen, Ha said.

The second is realistic skeptics, he said. Individuals with this perspective believe trust is not possible with North Korea. Ha said 80 percent of Washington D.C. think tanks fall into this category.

The third category is Trumpian pessimism, which is made up of individuals who not only distrust Trump, but also think failure is bound to happen, he said.

The fourth is cautious optimism. Ha, a cautious optimist himself, said this group believes there is a possibility for a summit on what is happening with North Korea’s nuclear program and the consistency between Kim and Trump.

The last is romantic wishful thinkers, he said. People with this perspective hold the wishful belief that something good will happen.

Some people believe in CVID: complete, verifiable, irreversible denuclearization, Ha said. However, he said this seems unrealistic to him. He said while the nuclear sites would be dismantled, there are still scholars who would know how to build the missiles.

Ha said one of the necessities to denuclearization would be a mediating role played by China, Russia and South Korea.

Ha also said he believes there could be a potential domino effect of nuclearization. He said the more North Korea does with its nuclear program, the more there is potential for other surrounding countries to start one themselves.