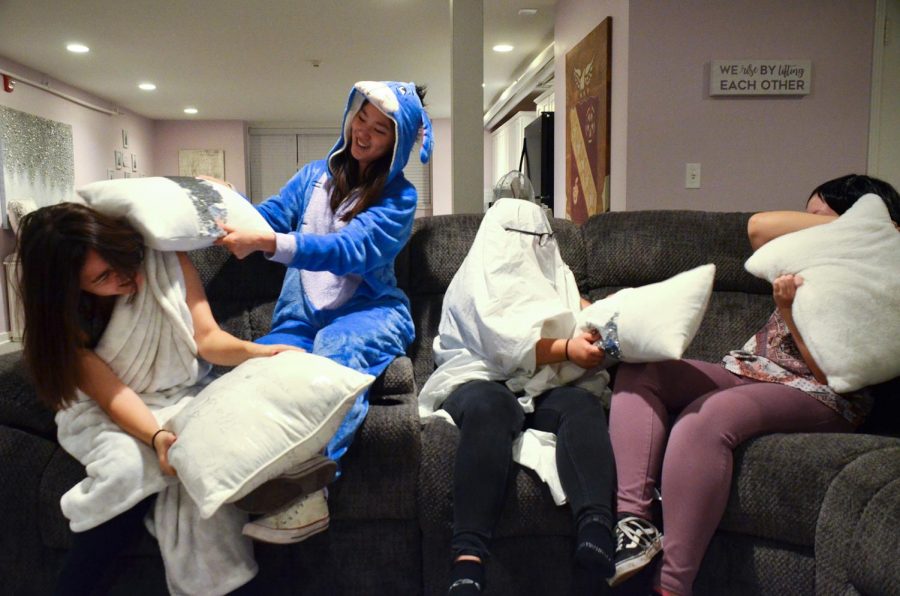 "Stay amongst friends you know well," said Liz Copeland, a junior member of Alpha Omicron Pi who has seen it all when it comes to Halloweek parties, especially those on Greek row.

Halloween is just around the corner, and while college students are too old to go trick-or-treating, many capture the holiday spirit by going out and partying during WSU’s Halloweek.

Liz Copeland is a junior and has been a part of her sorority, Alpha Omicron Pi, during all of her years at WSU. She has seen Halloweek evolve over the years and expects this year to be similarly spectacular.

“If we didn’t have College GameDay this year, this would be the biggest weekend of the year,” Copeland said.

For Greek Row, Copeland said the parties begin Wednesday and lasts the entire week until finally ending next week on Halloween.

The week has become such a large event, some choose to drive many miles to join the Pullman community in their celebration. Copeland said that a lot of the problems from past Halloweeks came from these outsiders.

“My freshman year there were so many people who weren’t from WSU,” Copeland said. “A lot of UW kids, Gonzaga and Eastern people were coming down. The power went out on half of Greek Row that year. There were just a lot of people.”

Copeland said she is happy that the WSU Greek system introduced wristbands last year, preventing anyone outside the Greek life to come and pack themselves into the fraternity houses.

To the dismay of people non-affiliated with fraternities and sororities, Copeland said that the next best place for freshman would be to go off-campus to apartment and house parties. People don’t need to necessarily know anyone in the parties they are going to, but should stay with at least four others for safety.

Abbie Kreiter is a WSU sophomore studying pre-nursing and Copeland’s sorority sister. She said that people need to be prepared to handle themselves, whether they are a part of Greek life or not.

“It’s an event,” Kreiter said. “This isn’t your average weekend where you go out and party with your friends. This is an event where people specifically go out to drink.”

Kreiter said that Pullman drinking is a unique type of drinking. Freshmen will need to be careful if this is their first time partying at a college.

“It’s a culture that is very different,” Kreiter said. “It’s match-based, [like] ‘I am going to outdo you.’ That type of thing. Go at your own pace and know your limits. I know that’s really hard to do as a freshman but just be aware about how much you’ve been drinking and what you’re drinking.”

The Green Dot program that incoming freshman are required to take should give students a reference point for much they can handle even if they haven’t done much drinking before.

Kreiter said that people should trust the WSU students around them and should listen to them if they are giving advice. She said chances are, they know a little more than you do.

“The biggest thing is Cougs help Cougs,” Kreiter said. “That needs to be engraved in people’s minds. Cougs will help you and you need to help them.”

Ayush Kapoor is a junior studying computer science, but only just transferred to WSU this semester. So this year will mark his first Halloweek.

While he hasn’t expected it himself, Kapoor said it isn’t hard to imagine freshmen finding it difficult to enjoy themselves over the next several days.

“They will have a hard time,” Kapoor said. “I’ve heard seniors would intentionally tell them a wrong address in order to mess around with the freshers. I do see awkward stuff like that happening.”

Even with the potential problems people may face, Kapoor said he won’t be missing the parties this week and encourages others to enjoy themselves while also staying safe.

“Stay amongst friends you know well,” Kapoor said. “Go into parties with those people and try to get out [at] the right time.”

Copeland said that after someone is safe, it is easy for them to enjoy the large-scale of the Halloweek parties. The last thing someone new to the WSU community needs to worry about is wearing the right costume.