Both men’s, women’s teams prepare for next race within conference 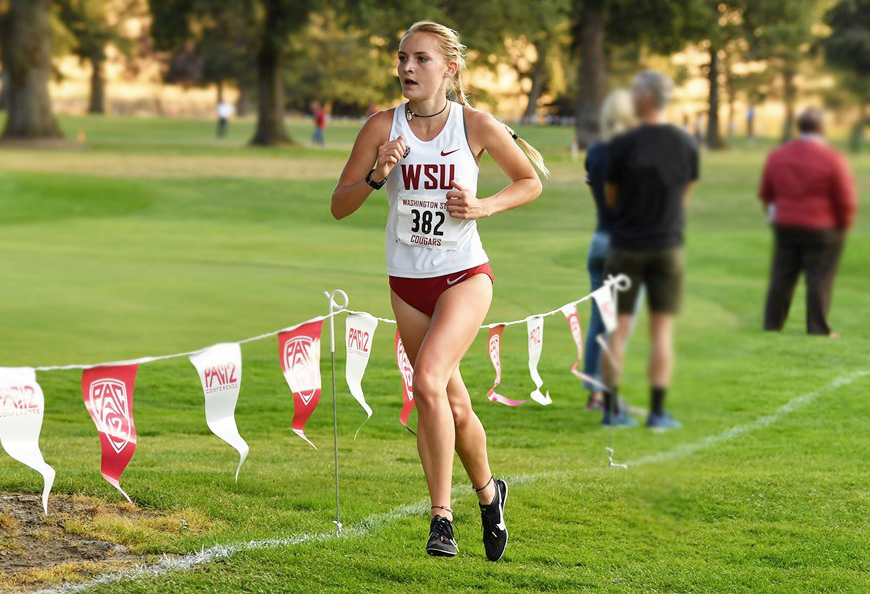 Junior Kaili Keefe participates in a meet earlier this year.

The WSU men and women’s cross country teams will compete at the Pac-12 Cross Country Championships on Friday in Stanford, California. The men’s team will go into the meet ranked No. 29 in the nation and the women’s team will go in No. 15 in the West Region.

Freshman Emma Jenkins said both teams have put a lot of work into preparing for the Pac-12 Championships and she is eager to see how the team will do against all the schools in the conference.

Senior Chandler Teigen said he believes things will go well for the team as long as everyone competes like they did in previous meets and in practice. Some athletes who did not make the Pre-National Meet team will be competing in the Pac-12 Championships.

“They really do bring a very specific energy to the guys who went to [the Pre-National Meet],” Teigen said.

Jenkins and Teigen both led their teams at the Pre-National Meet as they both finished in first place for the team. Both the men and the women will be racing 10 athletes at the Pac-12 Cross Country Championships.

The Pre-National Meet and Inland Empire Championships gave Wayne Phipps, director of cross country/track and field, an opportunity to see who he would have on his championship roster. Phipps said it was extremely difficult to decide who would be going to the Pac-12 meet due to both teams having a lot of depth.

He said preparing a race for the Pac-12 meet is unique because it’s a smaller meet in terms of the number of runners, which can help athletes follow their race plan a little more closely.

After coming back from the Pre-National Meet, Phipps said he thought last week was a good balance to get people back on schedule and recovered. This week people were feeling more recovered and are very excited, he said. With the preparation the team has done, Phipps said he thinks his teams are ready to go.

The end-of-the-year goal is the NCAA Championships, but Phipps said the Pac-12 meet is always exciting.

“The Pac-12 is such an amazing meet,” Phipps said. “You are looking at by far the best cross-country conference in the nation.”

Both teams’ runners will take off starting at 11 a.m. Friday at the Stanford Golf Course.