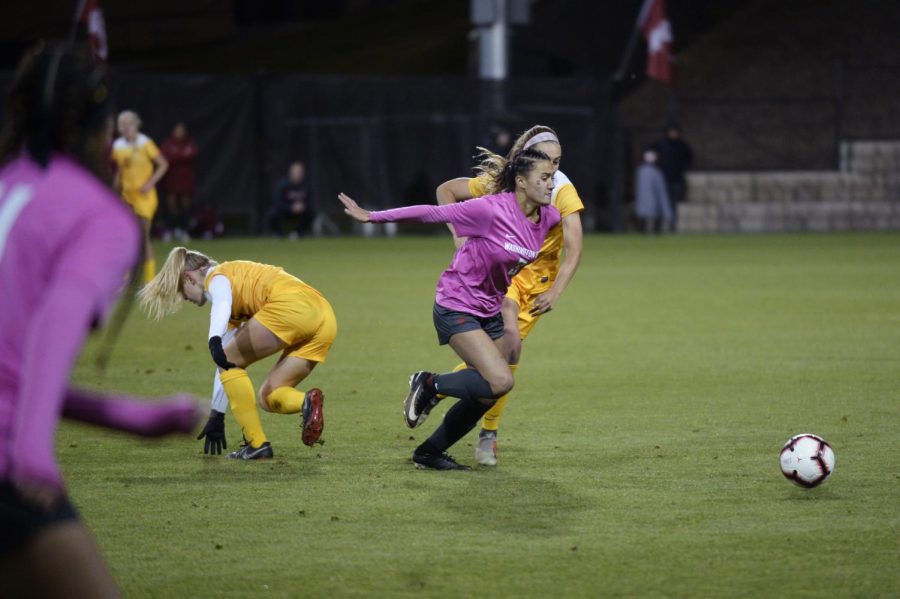 Sophomore forward Makamae Gomera-Stevens dribbles her way around USC defenders in a game Oct. 13 at the Lower Soccer Field.

WSU soccer will come home to face the University of California, Berkeley, on Thursday. The Cougars struggled this past weekend when they traveled to Arizona, picking up two more losses for the season and losing their No. 22 rank.

The Cougars have lost five consecutive games, bringing their former 10-0-0 undefeated record to a 10-5-0 record. Although the team has faced a bump in the road in the midst of its season, Head Coach Todd Shulenberger is still determined his team will get back on track.

WSU’s current losing streak is the longest they’ve had since they dropped six consecutive games in 2010. The Cougs hold a 7-1 record at home compared to their 3-4 record on the road.

The team hopes to use the home field as an advantage to get the victory over Cal and put an end to the losing streak.

In the past four years, the Cougars have only beat the Golden Bears once, which was in 2014 at home. The past three years, WSU has lost one game at home and two in Berkeley, California.

The Golden Bears currently have a 5-9-2 record for the season and a 1-6-1 record in the Pac-12 Conference. Although WSU has a better overall record, the Cougs will have to show up at the Lower Soccer Field with energy in order to pick up their first win since Sept. 30.

WSU has had an interesting season as it has moved up and down the rankings in a short amount of time, Shulenberger said.

“I don’t think anyone has been in this, I don’t think there is a team in the country that has been through what we’ve been through this past year,” Shulenberger said. “But that’s OK, I’m positive, the group’s positive and the sun is shining today so you know better days [are] ahead.”

The last game the Cougars played at home was against No. 2 University of Southern California on Oct. 13. In this game, WSU lost by only one goal but competed solidly with the highly-ranked team.

With all three games left in conference play being at home, the Cougars are looking to get a win Thursday night to give them momentum for the next two matchups. A win would give WSU determination going into Sunday as it faces No. 1 Stanford University.

“I mean the last time we were here we gave the No. 2 team in the country everything they could handle,” Shulenberger said, “so regardless of who’s on the field and what we decide to do, this team will be ready to go.”

The Cougars will face the Golden Bears 7 p.m. Thursday at the Lower Soccer Field in hopes of picking up their first win in five games. The game can also be seen live on Pac-12 Networks.