WSU collaborated with scientists from Australian university for project 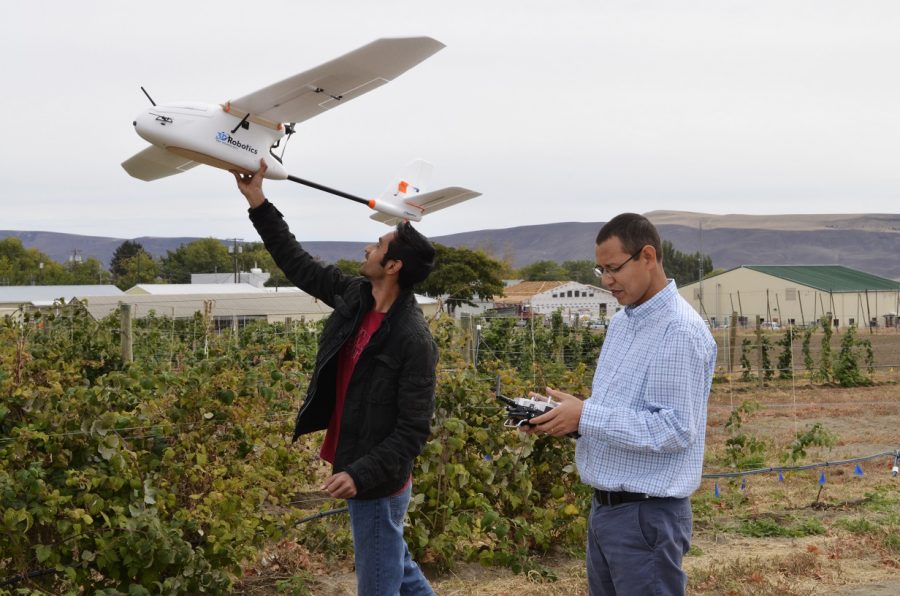 Assistant professor Manoj Karkee, right, and Suraj Amatya evaluate a fixed-wing unmanned aerial vehicle, which is a device that chases birds away from wine grapes.

In a partnership with the University of Technology Sydney in Australia, WSU scientists are working to create agricultural robots to help local farmers and industries maintain and harvest crops efficiently.

The partnership started on Sept. 24, said Manoj Karkee, an assistant professor in the biological systems engineering department at WSU. Both universities will exchange students, which allows them to work in different labs and use different robotic systems.

Karkee said the partnership will allow them to share resources and solve agricultural challenges together. They will soon write grant proposals in hopes of acquiring external funding for resources and supplies.

“When we get our projects funded for this kind of collaborative work, that will certainly allow us to acquire more laboratory and field resources that will be shared by both universities,” he said.

Karkee said WSU chose to partner with UTS because of the difference between Australian and U.S. cropping systems.

“Partnering with somebody from a different continent and different hemisphere gives us … two cropping cycles per year for any crops that we’d like to work with,” he said, “which is a great benefit.”

Universities in Europe or any other institution in the U.S. would not benefit WSU researchers because the cropping system and cycle will be similar.

“The team at UTS is very experienced and [has] world-class expertise in the fundamental aspects of robotics,” he said.

When UTS members visited in September, they identified three topic ideas they might pursue in the future, Karkee said. One of the ideas is to develop more robots that harvest apples and other fruit crops.

Another idea is to create a machine that applies chemicals to fruit crops more precisely and reduces the amount of chemicals wasted, he said.

One of the issues they found with the machines is that they spray in a “uniform basis,” which is when the machine scatters chemicals to places that may not even have trees or crops, Karkee said.

“That’s not the most efficient way to apply chemicals,” he said.

Karkee said they want to create a machine that can evaluate a tree and identify potential problem areas.

“A tree may have insects in only one branch or in the trunk,” he said.

Karkee said chemicals are used in multiple ways such as minimizing the infestation of pests or controlling the growth of a plant.

“Some plants may grow too fast [or] too big,” he said. “Farmers want to keep it relatively short so that harvesting and other tasks become easier.”

Some fruit crops like apples and cherries might have more flowers than the farmer expected, Karkee said. They want to create a machine that removes some flowers during the early stages and keep the amount of flowers the farmer wants.

“There [is] technology [that could] do this,” he said. “We want to develop [a] more robotic type of technology that could do it very, very precisely.”