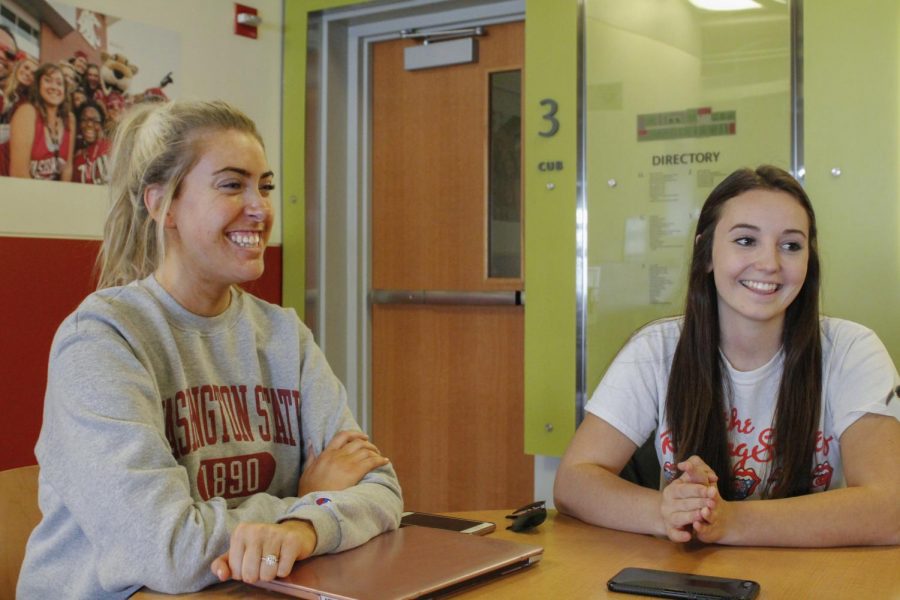 Panhellenic Council Members Anna McLeod and Demri Toop discuss the involvement in Circle of Sisterhood on Wednesday in the CUB.

The WSU Panhellenic Council will be sending 14 Panhellenic community and council members to build a school in Malawi during spring break 2019.

The actual planning for building the school is in the beginning stages, but the council has met its fundraising goal of $37,000, said Demri Toop, Panhellenic vice president for scholarship and service.

The council also sold pizza outside of the Chinook for International Women’s Day in March.

Coming up, members involved in the project are planning to have a Venmo challenge during the Apple Cup week against University of Washington because UW’s Panhellenic Council is also building a school.

“We are furthering our fundraising because any excess money will go straight to the Circle of Sisterhood to help with other educational purposes,” McLeod said.

The Circle of Sisterhood, a national nonprofit sorority organization which has a school-building project called Ambassador Trek, will be partnering with nonprofit buildOn to construct the school.

The idea for the philanthropic effort came from a conference Panhellenic Council members attended in Indiana, where the council and its adviser talked about different project ideas, McLeod said.

“We looked at which countries were most in need and what countries buildOn does the Treks in,” Toop said. “We also looked at poverty rates, women’s education and what their economy is like.”

There will be three Panhellenic Council members, 10 Panhellenic community members and an adviser going to Malawi to build the school.

Panhellenic community members interested in the philanthropic work went through an application process to be chosen.

“An invitation was extended to everyone on the Panhellenic Council,” McLeod said. “Then those that chose to accept are the ones that are going.”

The council is still working on the exact location because there are multiple areas to choose from, McLeod said.

“We decided to build a school because our council values women’s education,” Toop said. “We understand that we are privileged to even be going to college because there are women in Malawi that don’t even know how to spell or write their names.”