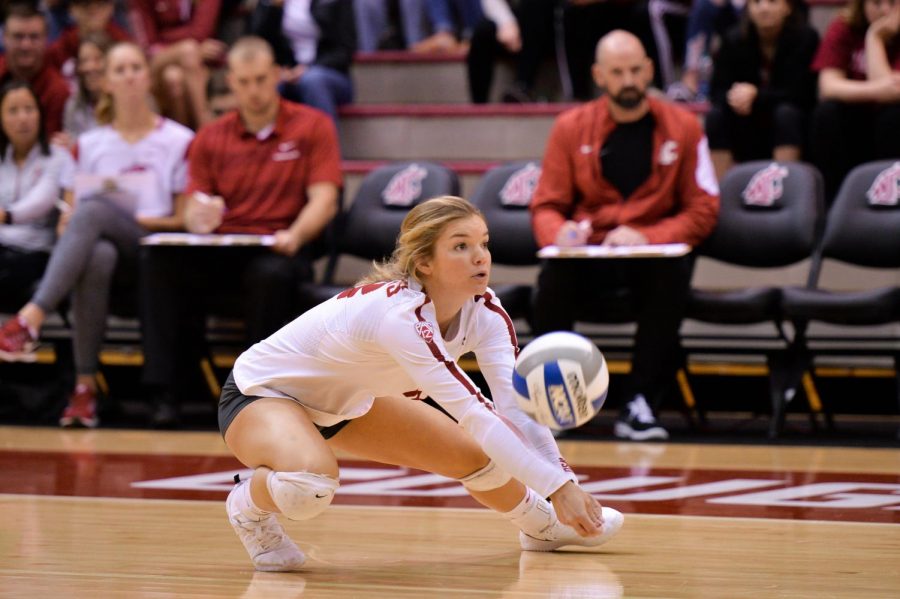 Senior defensive specialist Olivia Coale attempts to receive a strike from the University of California, Los Angeles, on Oct. 21 in Bohler Gym. Coale has 110 digs on the season and earned a career high 12 digs in a match Sunday.

No. 19 WSU volleyball, coming off a 3-0 victory Sunday against No. 20 University of California, Los Angeles, hit the road Wednesday against University of Utah for the teams’ second matchup this season.

The Cougars swept the Utes in three sets to claim their third straight victory.

The last time the Utes and Cougs played each other was Sept. 28 and WSU came out on top in five sets.

In the first set Utah took an early lead, but WSU fired back with a 5-0 run to make it 15-9 halfway through the set. The Utes had their own 5-0 run near the end of the set putting the score at 23-22, but WSU finished out the set with a kill from senior outside hitter McKenna Woodford followed by two attacking errors by Utah.

The Utes had eight total attacking errors in the first set compared to the Cougars three while Woodford tallied 10 kills.

The second set saw the Cougs and Utes play a game of tug of war with the lead. This kept each team away from scoring streaks until WSU made a 7-2 run and took a 17-14 lead going into a media timeout with efforts from senior middle blocker Ella Lajos, sophomore outside hitter Penny Tusa and Woodford.

The Cougs took a four-point lead to make it 22-18 with more kills coming from redshirt junior middle blocker Jocelyn Urias and Tusa.

With extra room provided by the Utes’ attacking errors, WSU went on a 4-0 scoring run. Woodford added two more kills, and Tusa got a kill and a service ace to finish out the second set 25-18

The third set of the match started with errors left and right as Utah and WSU both made a pair of attack errors, then made service errors on both sides. The first kill came from Lajos, who ended the error streak and gave the Cougars the lead. Senior defensive specialist Olivia Coale made her third service ace out of the five earned by the Cougs, bringing it to 11-4 in favor for WSU.

Utah started falling behind and had already used two timeouts halfway through the set as the Cougs went on a 4-0 scoring run, making it 15-6. The third set ended with a 25-21 Cougar win, with the final result being a sweep over the Utes.

WSU’s next match will be against University of Colorado at 6 p.m. Friday in Boulder, Colorado. The game can also be seen live on Pac-12 Networks.