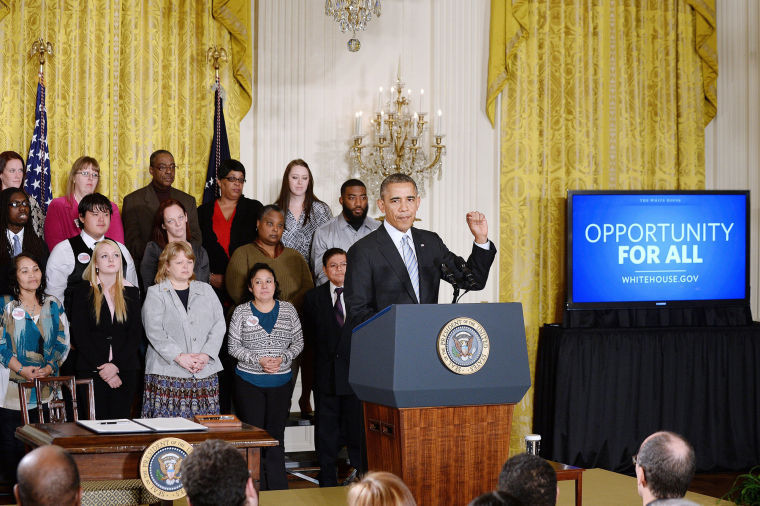 President Obama speaks at an event to sign an executive order requiring federal contractors to pay their federally-funded employees on new contracts at least $10.10 an hour in the White House, Feb. 12.

As the saying goes, more money is more problems.

Over the last few months, President Barack Obama has publicly stated that raising the federal minimum wage is a top legislative priority.

Last January, President Obama called for a $10.10 minimum wage in his State of the Union address. His plan would see increases this year, next year, and again in 2016 to bring the rate to $10.10, according to an article by The Washington Post.

Last Friday, while delivering a speech at the Democratic National Committee Winter Meeting in Washington, the president argued that it is time to “give America a raise or elect more Democrats who will do it,” according to an article by the Herald Times Reporter.

The idea behind raising minimum wage is to lift hard-working people out of poverty. This notion appears sensible and honorable. However, what many people fail to realize is the raise is likely to lead to a significant loss of employment across the nation if it comes into effect.

President Obama’s plan to raise the federal minimum wage to $10.10 an hour could cost as many as one million jobs by late 2016, according to a report conducted by the Congressional Budget Office.

The CBO admits it cannot be completely accurate with its prediction, but estimates a job loss figure of around 500,000 — 0.3 percent of the working population.

This is generally a result of businesses hiring less people when they are forced to cut a bigger paycheck for their workers.

The current minimum wage is $7.25 an hour. The jump to $10.10 over the next three years represents a near 40 percent increase in minimum wage. You don’t have to be an economist to recognize the enormity of this increase, or to guess that this excessive pay raise will have repercussions.

The same CBO report explores the effects of raising the minimum wage to $9.00 instead, which would have less of an impact on employment and still benefit minimum wage workers by raising their pay by $1.75 an hour.

However, Mr. Obama and top Democratic leaders continue to ignore these predictions and claim that any evidence against such a raise is an overestimation and inconclusive.

The latest Washington Post-ABC News poll reveals that raising the minimum wage is an issue many voters are thinking about this election season. When a random sample of 1,002 adults were asked about what issues would make them most inclined to support a congressional candidate this year, 50 percent of Americans said they were more likely to vote for a candidate that supported a raise in minimum wage, according to an article by The Washington Post.

While research demonstrates that the cost of higher wages equals fewer people working, Obama continues to push his agenda. If the raise is implemented in the next few years, the short-term results will be that the Democratic Party wins voters. Long-term results are a percentage of the population making more money than they did before, and an even greater population will be left searching for employment.

Obama’s goal should instead aim to help people out of entry-level jobs into better jobs in order to support education and a growing economy.

– Ashley Lynn Fisher is a junior English major from Gig Harbor. She can be contacted at 335-2290 or by [email protected] The opinions expressed in this column are not necessarily those of the staff of The Daily Evergreen or those of Student Publications.