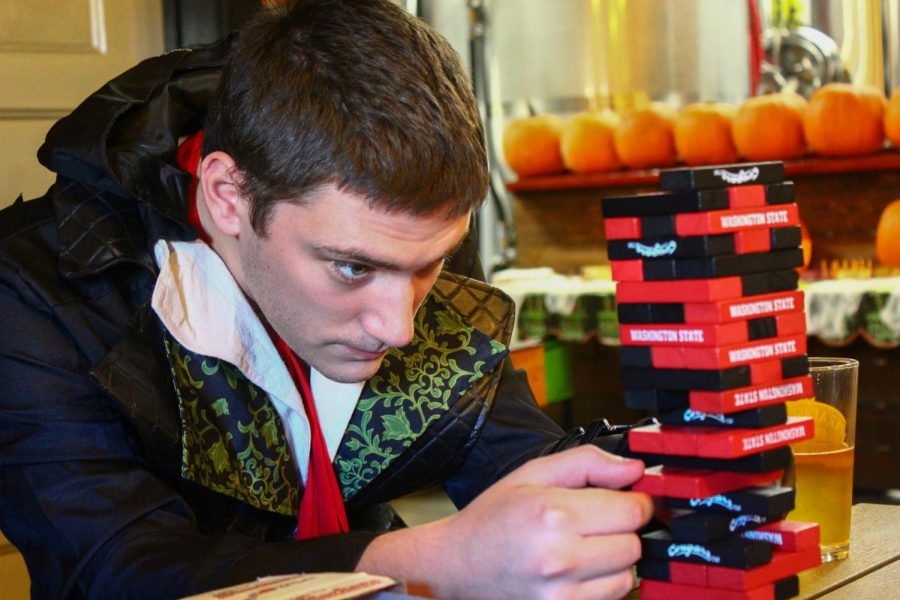 The Paradise Creek “Booery” hosted its first Halloween party Saturday at its Trailside Taproom. The event provided patrons with various different activities for not only beer drinkers, but for dogs and children as well.

Emily Dennis, event coordinator for the Trailside Taproom, said this event was much more involved than her previous ones.

“This is one of our bigger events,” Dennis said. “It was a lot more preparation but I’m hoping it’ll be worth it and everyone has fun.”

At the event, there was a table set up with a candy bucket as well as homemade treats Dennis made herself. There was also a row of over a dozen pumpkins that stood behind the treats, waiting to be carved.

Dennis said she wanted to supply the pumpkins and carving supplies for free to give the opportunity to anyone who hadn’t carved one yet.

“It’s expensive, but people have a good time with it,” Dennis said.

She said she has seen an influx of people since she started working at Paradise Creek Brewery in May. She believes it’s important to get the right people into the brewery to hang out rather than turning a profit with the events she puts on, she said.

During the Halloween themed event, anyone who arrived in a costume would get $1 off each drink they purchased. Dennis said she enjoyed seeing her regular customers dressed in their best Halloween costumes.

In addition to the costumes, customers could further discount their drinks by bobbing for apples.

“We hammered bottle caps into the apples,” Dennis said. “Some have two dollars, some have a dollar, whatever one you get basically, you pull it out and you see how much you get off.”

Two apple bobbing participants were WSU students Zachary Brown and Shelby Jamieson. The two had been together as a couple for a few months and decided to come to the brewery for the first time.

Brown said the atmosphere of the brewery was something that made an impression on him despite his short time being there.

“When you compare it to the campus, it stands out,” Brown said. “I’m totally going to bring my parents here. They’re big brewery-goers and I like how quiet it is.”

Brown and Jamieson came in costume. Brown wore an outfit that belonged to his favorite hooded character in “Assassin’s Creed,” and Jamieson dressed in a bright Snow White costume. Both said they were excited to participate in the brewery’s costume contest on Facebook and Instagram.

“If we get the top one, it’s date night,” Jamieson said. “And if it’s not, it’s presents for him for Christmas.”

As people filed into the brewery to catch the kickoff of WSU football against Stanford University, it became apparent Brown and Jamieson would face some competition.

Sarah Scholes, a mother of two who brought her kids and dog to the brewery dressed as Elastigirl from “The Incredibles,” said she started coming to the brewery in the summer and always stops by to check out its latest events.

“I think it’s great they’re doing this,” Scholes said. “It’s a kid and dog-friendly event and it coincides with the Cougar game. It’s a fun way to spend an afternoon.”

The party lasted for the full duration of the football game and eventually came to a close at 9 p.m.

Dennis said she was happy with how the Halloween party turned out and looked forward to planning for Veteran’s Day and the brewery’s first anniversary in November.

“Sometimes it gets stressful,” Dennis said. “But it’s fun, especially because I am getting my foot in the industry and this is my first job doing this. I’m building relationships with [the customers]. They remember me and I remember them.”