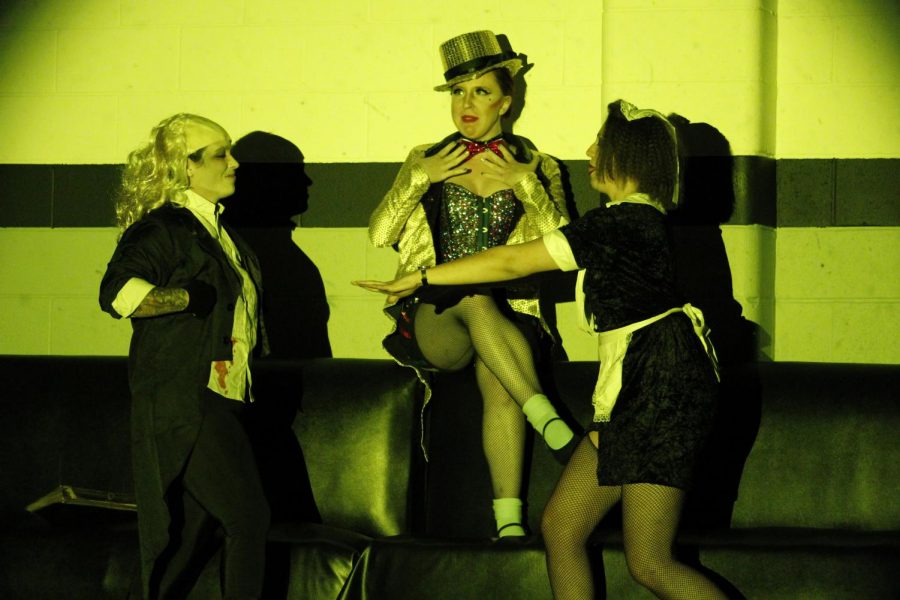 The shadow cast for “The Rocky Horror Picture Show” rehearses on Oct. 21 at the Moose Lodge in Moscow for its shows Friday and Saturday at the Kenworthy Performing Arts Centre.

The Kenworthy Performing Arts Centre put on a performance of “The Rocky Horror Picture Show” with an accompanying shadow cast Friday and Saturday, “Time Warp”-ing the audience back to the movie’s origins.

“The Rocky Horror Picture Show” became an instant cult classic with its debut in 1975 as a spoof of sci-fi, romance and musical theater movies.

The movie has remained a Halloween favorite particularly in the LGBTQ+ community. The draw comes from the fact that it seemed to welcome all people to join Dr. Frank N. Furter’s motley crew.

The show follows the story of sweethearts Brad and Janet who take refuge in Dr. Frank N. Furter’s mansion. That’s where their night takes an exciting turn.

The movie showings traditionally have a shadow cast, actors who perform lip dubbing for selected scenes from the movie. This year’s showing was no different.

Dr. Everett Scott was played by Twitch, a local drag performer. Twitch is a returning actor to “The Rocky Horror Picture Show” shadow cast and said he loves the show and what it stands for.

The show itself hold plenty of twists and turns, but the community’s call-backs and interaction with the show is the main reason people flock to the movie showings, Twitch said.

Daniel Stahn, a newcomer to the show and Moscow local, felt the community showing could have been better if it was more accessible. He suggested watching the movie before going to the show to better enjoy the community’s interaction with the movie.

“If I could have subtitles I would have enjoyed it more,” Stahn said. “I feel like I missed the majority of the dialogue.”

But community members say watching the movie beforehand might actually hinder the experience.

“Why would you ruin the experience for yourself?” Twitch said.

The community has made the movie an event of its own. Watching the movie and attending a shadow cast showing are very different experiences, Twitch said.

“I wasn’t living in Moscow yet and everyone was so welcoming,” Twitch said. “It was my first little Moscow family.”

Since the public showing holds many twists for unsuspecting audience members, Twitch recommended bringing new people to the show for the full experience. A cult phenomenon such as Rocky Horror is always better the more times you experience it, as each time you go is a slightly different experience, Twitch said.

“The more you go, the better it gets,” Twitch said.

This is good news for regular attendees, as the Moscow-Pullman shadow cast and performing community hosts a Rocky Horror experience each year.