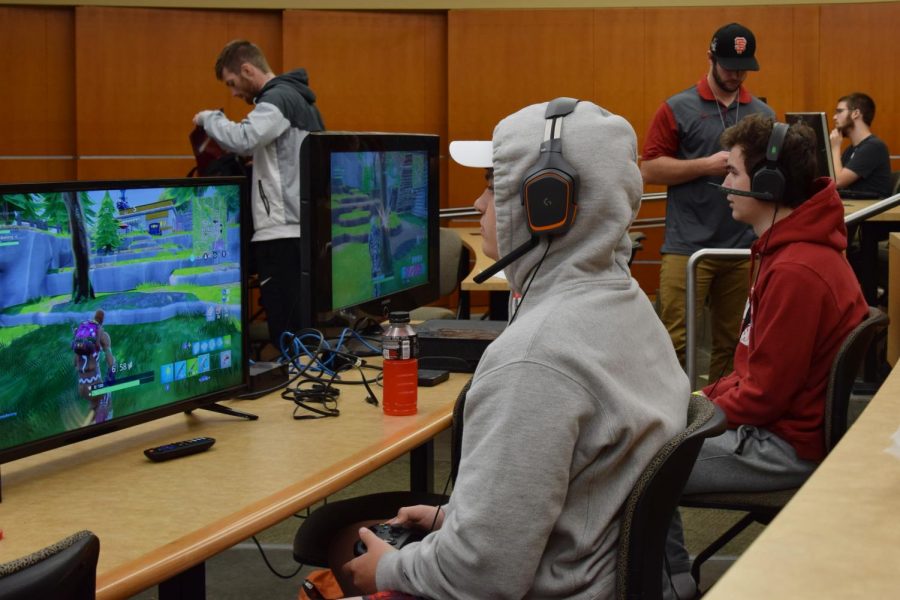 Teammates Daniel Brents, left, and Ben Bledsoe, right, gather materials in Fortnite during the esports competition Sunday in the CUE.

No Truce on the Palouse, a student-run Fortnite duo tournament which featured a $100 Amazon card for each player of the winning team, was held Sunday afternoon in the CUE. Participants paid $15 per duo to play and the goal was to get more kills than the other teams in separate matches.

With students forming in teams of two, players came into the event with monitors and TV screens in hand. With plugged in and freshly-charged wireless controllers, the six-team championship was underway.

The rules of the game were simple. In a best-of-three set, whichever team had the most cumulative kills would win the match.

Since more teams arrived than were originally registered, the tournament became a round robin event where every team meets each other at least once. However, due to time restrictions, not every team was able to play each other. After four rounds, the final four teams of the six were chosen for the semifinals.

These four teams were the self-titled Tryhards, Take No Fall Damage, Best Darn Warriors and Oakland Gray. Team Tryhards and Best Darn Warriors played in the first round of the semifinals and after a close sudden-death set the BDW won after the Tryhards were taken out by a rocket launcher, which cut the team’s kill count chances short.

Another matchup featured Take No Fall Damage against Oakland Gray. In its first set, OG took the victory, bringing its total kill count to just over 10. TNFD fought hard in its first set but was far behind in total kills, giving worries to whether the team would win or not. OG got a couple of kills in its second set to give the team a comfortable lead, but then the unthinkable happened.

As spectators and previous players stood watching the monitors broadcasting TNFD’s game, the room erupted in celebration as a comeback was made. One after another the duo went on a kill count spree, getting in a couple sniper trick shots along the way. This gave the team a victory and a two-kill lead that won TNFD the semifinal bracket and advanced them to the championship match against BDW.

The all-day event was coming to a close as console-using BDW went against PC comeback kings TNFD. After the first set, BDW took a handsome lead as its opponents died early, giving the team zero kills to start the first set.

Everyone was expecting another crazy comeback, but it didn’t happen as BDW got even more kills to place it in a comfortable lead. The duo ultimately won the tournament and $200 in gift cards.

“I have no idea what I’m going to buy, I haven’t thought of that yet,” BDW sophomore Gunner Charbonneau said. “I might buy ‘Red Dead Redemption 2.’ [This] event was actually very fun, it was put together well.”

“This was awesome,” Burrow said. “I think I’m going to use my money to buy an elite controller for the Xbox.”

Though the console users beat PC this time, there are more opportunities to play again in the future. The WSU Esports Club and Linux Users’ Groups plan to release weekly events, including the upcoming WSUCon on Feb. 15 and 16.