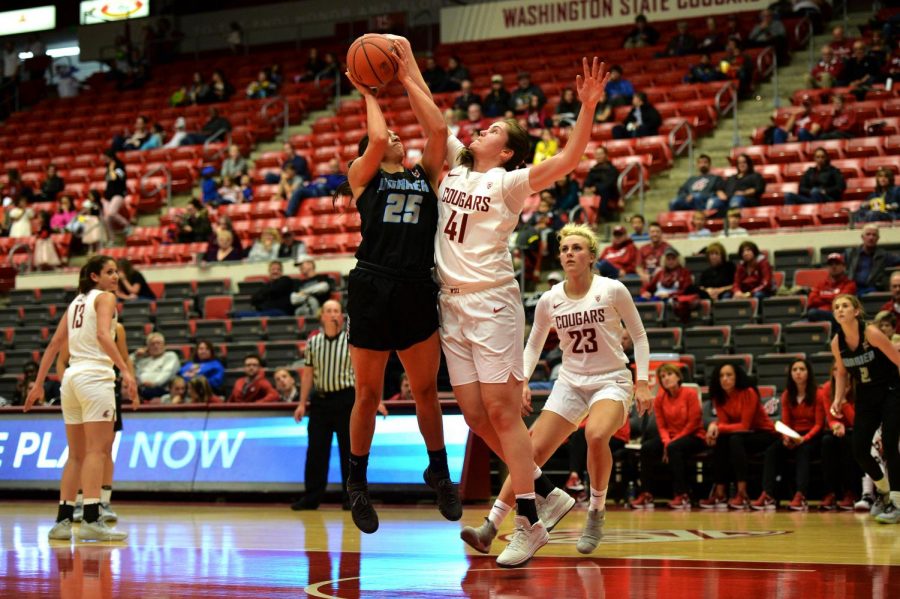 The WSU women’s basketball team defeated Warner Pacific University in an exhibition match on Monday night by a score of 106-41 in Beasley Coliseum.

Redshirt junior forward Borislava Hristova set the tone early for the Cougars as she managed to go 6-7 from inside the paint scoring 14 points and picking up four rebounds as WSU had a 37-8 lead by the end of the first quarter. Hristova would go on to finish the night with a team-high 26 points.

“It just felt great to get out there,” Hristova said. “There is always something to be working on but I’m really pleased with our performance as a team.”

While the Knights did perform well at the free throw line going 9-10 in the first half, their rough start carried over into the second quarter as their total made attempts would be 3-26 from the field, 11.5 percent, through two quarters of action compared to WSU’s 26-41, 63.4 percent, as they trailed 63-15 by the end of the half.

Freshman guard Cherilyn Molina was a key contributor to the offensive production throughout the game, knocking down all four of her three-point attempts in the first two quarters and four assists in her college basketball debut, finishing the night with 15 points.

“I had a lot of nerves going into the game but once I hit my first shot it gave me a big confidence boost,” Molina said.

Though Warner Pacific had a rocky first half, the Knights attacked WSU on both sides of the ball during the second half, playing much more aggressive basketball and picking up more than half of their total points in a matter of a couple minutes.

“In the first two quarters of play we played very sloppy basketball,” said Head Coach Matt Gregg of Warner Pacific. “In the third and fourth quarter I feel we picked up our performance but we still have a lot of work to do.”

The Knights’ poor performance in the first half would prove to be too hard to come back from as WSU continued to control all aspects of the game, including out-rebounding Warner Pacific 55-23 with senior center Maria Kostourkova paving the way with a team-high 16 rebounds.

New WSU Head Coach Kamie Ethridge was excited about the results of the game.

“I loved our energy in the first half,” Ethridge said. “Our team performed really well. I thought we started with some great intensity. There is not a lot to be dissatisfied about. I think in the second half we didn’t play like I wanted us to but for the most part it was a good performance.”

The women’s basketball team will take on Utah State University on Nov. 6 at home for the season opener.