Speaker did not believe in climate change, but son inspired new stance 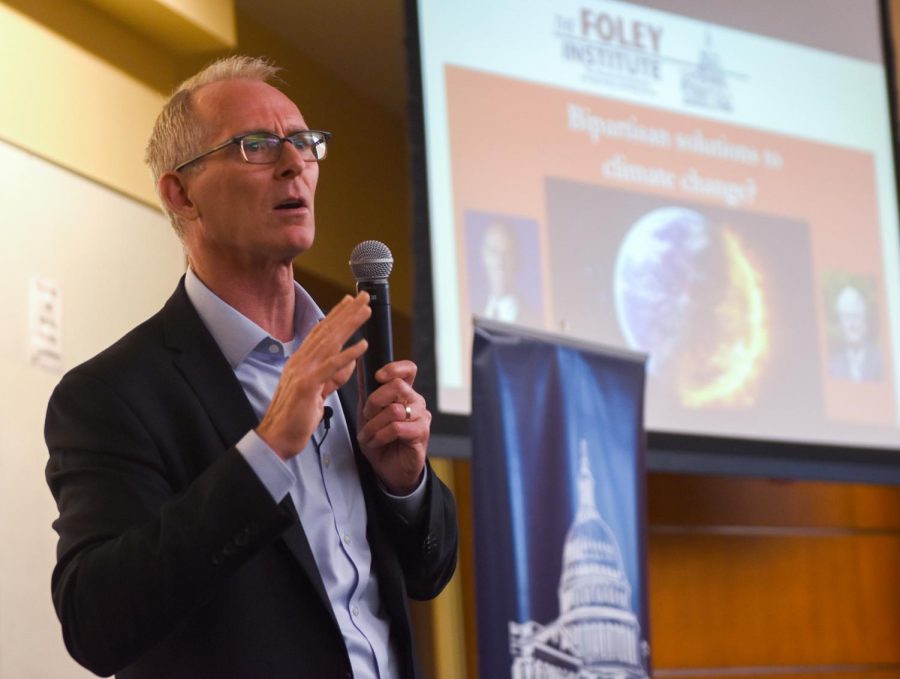 Republican Bob Inglis talks about his time in Congress and experience with climate change Tuesday.

Bob Inglis and Brian Baird, former representatives in Congress, talked about the possibility of a bipartisan, revenue-neutral, border-adjustable carbon tax at a Foley Talk on Tuesday evening.

Baird, a Democrat, said Republicans and Democrats have become so polarized, there is an inability to listen to the other party respectfully.

Inglis, a Republican, said for his first years in Congress he thought climate change was nonsense. That changed when his son told him he needed to change his stance on the environment and Inglis realized there was evidence of climate change.

In Antarctica, ice cores pulled from the continent show a record of the Earth’s atmosphere, he said. They reveal there was an increase in carbon dioxide levels once the Industrial Revolution started, he said.

Inglis and Baird both said they believe there should be a carbon tax.

The price on carbon dioxide could be applied at the pipeline, Inglis said. That would mean the IRS would only need to watch about 2,000 companies which they could easily do, he said.

However, this would mean gas could increase 21 cents per gallon and electricity could increase $11 per month, he said. This would be offset by making the carbon tax revenue-neutral.

The former congressmen think the tax should be border-adjustable too.

The carbon tax would be imposed on imported goods from countries without a carbon tax, Inglis said. A problem is that China might challenge the tax and say it is an impermissible tariff, he said.

“We think they’d lose that case based on precedence in the chemical industry,” he said.

Currently, the precedent is to tax a chemical coming into the U.S. based on its content, Inglis said.

The carbon tax would be a content tax, he said.

“So let’s say it’s a sheet of flat steel [that is imported into the U.S.],” Inglis said. “We know how much CO2 was generated in the production of an equivalent piece of flat steel in America, and so we would apply that tax to the Chinese import of that flat steel and say, ‘You’re paying our carbon tax.’ ”

Inglis said he thinks China would then apply a carbon tax within its own country because the money brought in from that tax would go to Beijing instead of a U.S. port. If China were to apply a carbon tax they would not pay a tax on entry in the U.S., he said.

Another good thing about this idea, Inglis said, is that this would make it so the U.S.’s trading partners would follow the U.S.’s lead, which would make it a better solution to climate change. He said not only does the U.S. need to do this, but the whole world.

However, Inglis said he does not think Congress will be able to pass this kind of bill yet, either in this Congress or the next Congress, because it will not have the majority of votes. The bill must be bipartisan, he said.

Climate change should matter to a person of faith, to a pro-businessman and to an environmentalist, Baird said.

“We’ve got to develop a visible constituency on the right,” Inglis said.